Latest Articles
You are at:Home»Issues»Holiday 2020»Behind the Lens: 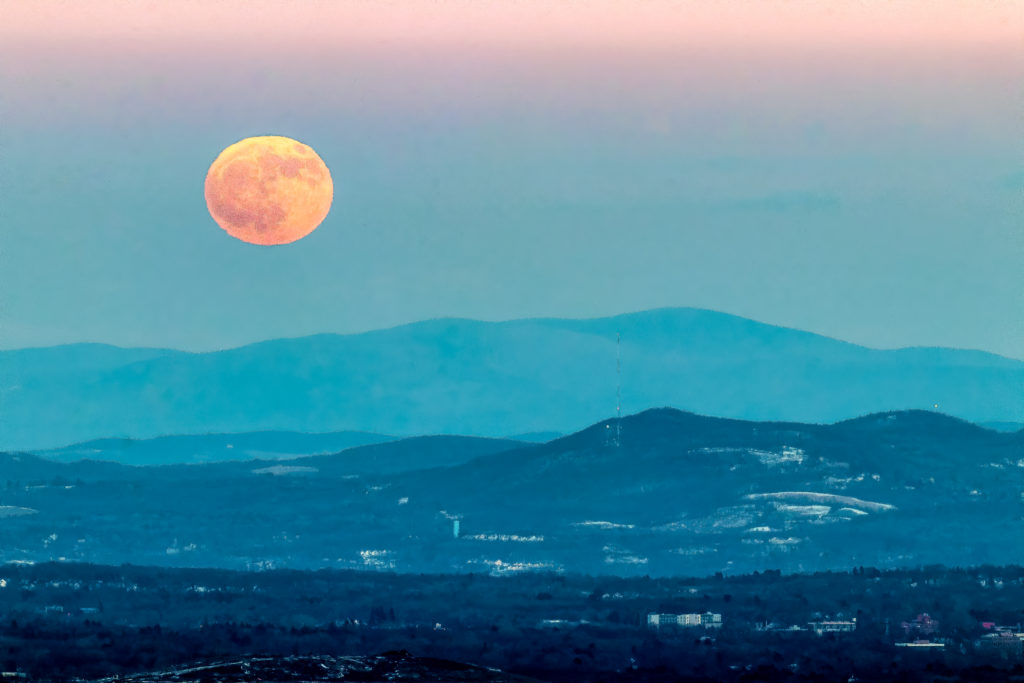 Sometimes, you go out to take a particular photograph, only to find another great one awaits. For some time, I have been captivated by the transition between night and day. No other time of day allows an observer—a photographer—to see a single place in so many different and fascinating states of lighting. The colors that occur at dawn and dusk are without rival, more vibrant and varied than any other time of day. Shadows are cast across landscapes in ways that add texture and contrast to them that isn’t normally there. That, and there’s the fascination with the rising and setting of celestial objects—the sun and moon.

It was December 12, 2019 and the full moon was due to rise moments after the setting sun. There was a thin layer of clouds—faint enough to see the moon and stars appear as darkness set in, but present enough to contribute to the beautifully colored sky, while the last light of day peaked through. I was set up at a slightly elevated vantage point in John Boyd Thacher State Park in Voorheesville. I wanted a tight, dead-on shot of the moon as it rose in the eastern sky that night, and I was in the exact right position.

Over the previous few weeks, I’d been at the park to photograph migrating birds of prey, the sun rise, with the city of Albany off in the distance, and the falls along the Indian Ladder Trail, as I carried my infant son on my back. I’ve always had a good sense of direction, geography and location. Having spent just a short time at the park, I knew where the sun would rise and set from this clifftop view, and I filed the place away in the back of my mind. I also thought that it would be a good place to practice a new hobby of mine: long exposure photography or taking a single photo over a prolonged period of time. With long exposures, a photographer can shoot everything from soft, waterside views and star trails in the night sky to colorful, crisscrossing taillights from vehicles passing in the night.

That afternoon, I packed my two cameras—one mounted with a lens to snap a closeup of the rising moon, the other to capture the widest possible view—along with my tripod and some neutral density filters and made my way to that exact overlook in the park. Those filters would allow me to darken what my camera was seeing, allowing me to get the long exposures I was hoping for. With them, I could turn the slowly moving clouds into streaks of light and color moving across the sky. I could turn 10 minutes into a single image that captured the passage of time. 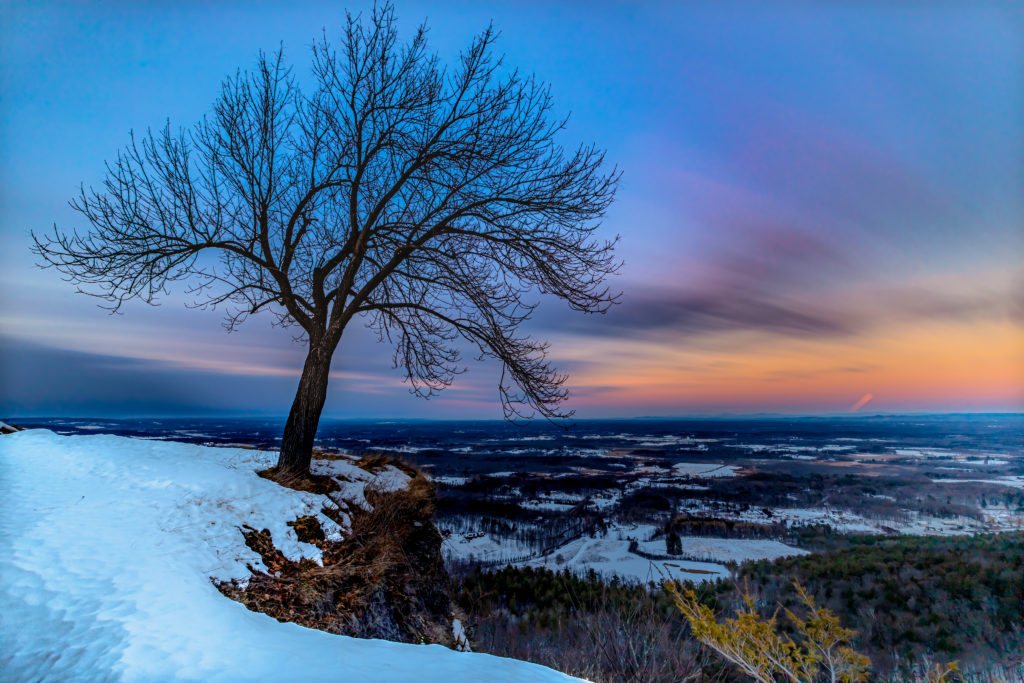 Atop an overlook in Thacher Park stands a “famous” tree. Local photographers love to shoot it, and for good reason. It is situated by itself, mere feet from the edge of the cliff, on the other side of a stone wall meant to keep people away from the unstable rock ahead. Beyond the tree is an unobstructed view of the valley below—cities and towns and the hills and mountains that make up the distant horizon.

This wasn’t the first time I’d photographed this tree. In fact, I have a collection of photographs from this vantage point of this exact tree, in a number of different seasons and weather conditions.

Earlier I’d looked up the precise time that the moon would rise, so in anticipation of this I setup my camera and tripod to take a 10-minute exposure of this view before me, the tree in the foreground, the sky as its backdrop. I set my remote trigger and let the camera do its work, freeing me to step a few feet away and capture a closer view of the moon as it came up over the hills on the other side of the Hudson River in the distance. That was the photo I was there for. I must’ve taken a few dozen shots of the rising moon, while my other camera sat on its tripod, still working on that one photo. At the time, I had no reason to expect that the photo I hadn’t planned for—the tree—would be the one that I’d end up appreciating that much more.

Finally, 10 minutes had passed, and it was time to stop the exposure. The result is what you see here. If you look closely at the horizon, you can see a small bright streak; that’s the rising moon.