Share your event with the community!
Submit it here 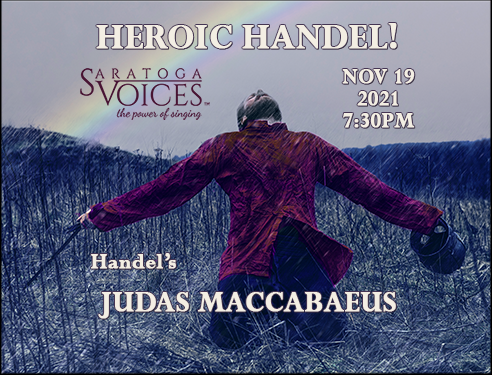 Saratoga Voices will perform a semi-staged version of Handel’s oratorio, Judas Maccabaeus, at 7:30pm on November 19 at Universal Preservation Hall.

The story of the hero Judas is told in the Book of Maccabees and is the origin of the Hanukkah celebration. Judas Maccabaeus was a Jewish freedom fighter and military genius who defended his country from invasion and secured freedom of religion for the Jewish people in 160 BC. This oratorio, composed in 1746, has become Handel’s most popular oratorio, second only to The Messiah.

Saratoga Voices, formerly known as the Burnt Hills Oratorio Society, has been singing for 50 years. They believe in the joy and power of singing to unite people as one, to change lives, and to create community.

Tickets for Heroic Handel! Handel’s Judas Maccabaeus ($40/$35 for seniors) can be purchased at the UPH box office – UniversalPreservationHall.org – or by calling the box office at 518-346-6204.  Seating is open, and the hall is fully accessible.