Before You Go: Bear Necessities

With the world coming out of 'hibernation,' remember to be compassionate and kind. 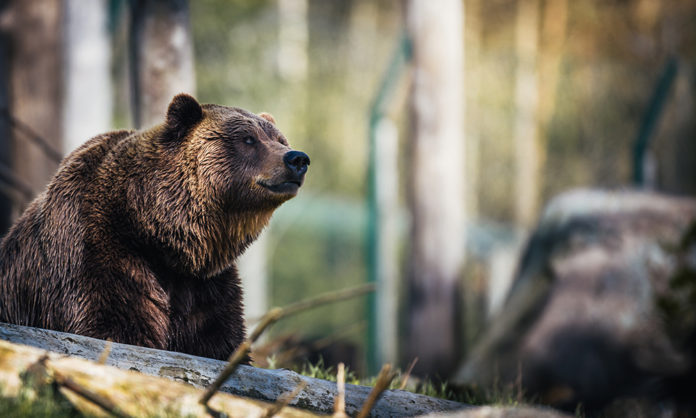 Once there was a guy hiking through the woods. Up ahead on the trail, he saw a big bear hanging out, eating a raw fish that it had just pulled out of the stream. The hiker, having read every article on what to do if confronted by a wild animal in the woods, immediately pulled off his backpack and rifled through it for his homemade bear protection kit. He produced two metal pots, a loud air horn and a can of bear spray.

While the bear appeared to be minding its own business, the hiker could tell that this was a trap, because up on the hill above the bear were three more just like it, all watching from the ridge. He played out in his mind exactly how this was supposed to go. The hiker casually walked by the bear, and it looked up from its fish and said, “Oh, hey, how ya doin’?” (In case you couldn’t tell from its strange dialect, this bear was from New Jersey.) The hiker, sensing this was a friendly bear, waved hello and continued on his merry way. That’s when the congenial bear could’ve screamed, “NOW!” and the other three could’ve run down the hill, tackled the man and enjoyed a delicious hiker stew for lunch.

But that’s not how it went down. (No hikers were harmed during the writing of this column.) Our brave hiker instead flipped the script on the clever bear, stopping a few feet away and banging the pots together. The bear, startled, dropped its fish and said, “Oh, damn it all to hell!” (Bears swear, in case you didn’t know.) The bear looked up and was about to ask the hiker why he’d been making such a racket on such a peaceful day, when the hiker pointed the air horn at the bear and squeezed the trigger. While the three bears on the ridge all immediately broke into “the wave,” as if they were in the stands at a baseball game, the fish-eating bear put its paws over its ears and yelled, “STOP IT!”

The hiker, in response to the bear’s aggressive tone, took out the bear spray and let loose, causing the area around them to smell like a combination of hot pepper and raccoon scat, which are both notoriously pungent. The bear, at this point, approached the hiker and said, “You know, pal, every day I see hikers come through and we have no problems. I’m a nice bear; why would you pull that nonsense with me?” The hiker, realizing he misjudged the situation entirely, responded, “I’m so sorry, Mr. Bear. How about we forget this ever happened, and you let me just walk on by?”

The bear smiled and said, “Would if I could, buddy, but my friends up there are watching, and if I don’t eat you, it’s going to make me look bad back when we get to the Bear Den. That’s a bar where we hang out and throw darts.” The hiker responded: “Darts? Are you any good?” To which the bear replied, “I barely miss. Get it? Bear-ly, hee-hee!”

Here we are, in the summer of 2021, and like a pack of slightly groggy but extremely hungry bears we are emerging from hibernation—i.e. the pandemic—and venturing forth into the world again. I know many of you are excited to fly to a far-off beach or go to Saratoga Race Course, but there are lots of other things to do with your free time if you want to beat the heat. Let me offer three that I have enjoyed in recent years and had a blast doing.

Tubing Down the Hudson
If you enjoy drinking tasty beverages and floating down a lazy river, while simultaneously gazing at gorgeous nature, you have to get some friends together and try tubing down the Hudson. Just an hour or so from Albany, there are a couple of companies—try Tubby Tube (tubbytube.com) or Sacandaga Outdoor Center (4soc.com)—that offer tubular tubing on the mighty Hudson. If you can’t swim, snap on a life jacket, but most of the time, the river is so shallow you can stop and stand up if you wish. My only recommendation is to wear something on your feet, because the rocks are slippery to walk on. Also bring a small cooler stocked with your favorite adult beverages.

The Farmer’s Museum in Cooperstown
On a recent trip to the Baseball Hall of Fame, my son and I happened upon a small farm that looked like something out of the 1800s (farmersmuseum.org). We stopped there and stepped back in time, walking through this miniature town and seeing how our ancestors lived. It was not only fun, but also fascinating. Make sure to have your smartphone camera at the ready.

Admit it: Every time you drive to Lake George you pass Fort William Henry (fwhmuseum.com) and never stop. I’m telling you, if you have kids or just like history, stop. The fort played a major role in the French and Indian War, and the tours are informative and enjoyable. Your guide might even fire off a cannon if you ask nicely. Hot tip: plug your ears.

I hope you have a safe and joyful summer, and remember: If you do bump into a bear (or a cranky, post-lockdown human out of practice on the social front)…have compassion and be kind.