CRL’s travel writer takes you on the countywide alco-crawl you should be booking for your next weekend jaunt. 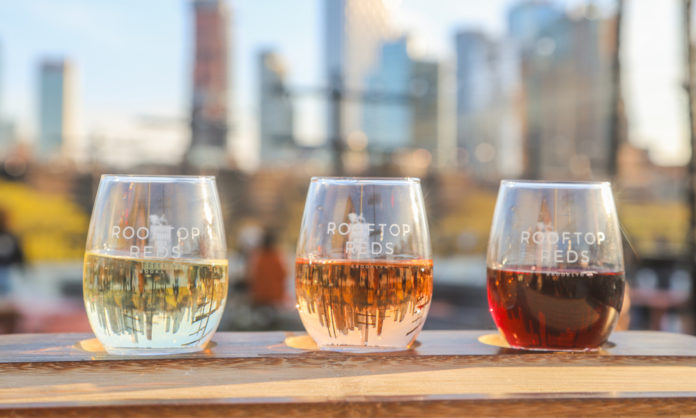 Say “I’m from New York” to someone in the Capital Region, and he or she will likely wonder which part of the Empire State you hail from. But say the same to anyone else in the world, and he or she will immediately assume you grew up in one of the five boroughs of New York City.

OK, so at least we know the difference between upstate and downstate—i.e. upstaters do a little less creative cursing at our fellow motorists and pedestrians—but when has that ever stopped us from Amtrak-ing it down to the Big Apple to reap its many rewards? There’s nothing like hitting a Broadway show in Manhattan (many of which will be reopening this September); grabbing a super doughy, just-right bagel in Brooklyn; or checking in with the monkeys and snakes at The Bronx Zoo.

Recently, though, I was surprised to learn that New York City, which encompasses five of the 62 counties I set out to explore this year—New York County (Manhattan), Kings County (Brooklyn), Queens County (Queens), Bronx County (The Bronx) and Richmond County (Staten Island)—has a lot more to offer than just the usual suspects. While us Upstate New Yorkers love to boast about our blackbelt in craft beverages, the Big Apple is teeming with them, too, and they’re well worth planning a tasting trip around.

At least to craft beer drinkers, it will come as no surprise that you can visit a brewery in each of NYC’s five counties—in fact, there are more than 30 breweries inside the city limits. But there are also a number of other less-expected sips to be had. It turns out that the City is home to a winery, two meaderies and three distilleries. And I was determined to try them all.

I emerged onto the sunny rooftop of the aptly named Rooftop Reds vineyard slightly out of breath. I had wandered around the Brooklyn Navy Yard looking for its entrance, then summited several flights of stairs before finally reaching its peak. But that was all part of the fun. Despite now finding myself overlooking a stunning skyline surrounded by grapevines, I felt as though I’d just stumbled upon a secret speakeasy. My thirst was quickly quenched by a flight of orange wines entitled, “Orange You Glad It’s Not 2020.”

Founded in the spring of 2016, Rooftop Reds was the world’s first commercially viable urban rooftop vineyard, aiming to break barriers in big city agriculture and make locally grown wine more accessible to the masses. It’s a beautiful concept to toast to over a Rooftop red (the wine, that is) and a slice of Il Porto pizza delivered directly to your table. Tip the delivery guy extra—he took the
stairs, too.

After my top-of-the-town wine flight, I decided that the best way to come back down to earth was with a terrestrial tipple. Conveniently located at the opposite end of the Navy Yard in the 120-year-old, castle-like Paymaster Building is Kings County Distillery. First opened in 2010, it was once the smallest commercial distillery in the country, churning out moonshine, bourbon and other whiskeys from five stills, 16 hours a day, seven days a week. When it made the move from Brooklyn’s Williamsburg neighborhood to the Navy Yard in 2012, in a sense, it was traveling back in time. Nearby its new home had been the site of the famous Whiskey Wars of the 1860s, during which the US government sent its own military there to lay waste to illegal distilleries. Though experts estimate there were tens of thousands of illicit stills in NYC during the Prohibition Era, just three (legal) ones remain between the five boroughs today.

While the closeness of the Brooklyn distillery to the rooftop winery made it a convenient jaunt, admittedly, I’m more of a clear spirits girl. So I made a beeline—i.e. took a 14-minute cab ride—to Williamsburg to taste some of NY Distilling’s gins, including a rose-petal infused variety. (And hey, if you like what brown spirits do for you, it makes its own whiskey, too.) While the distillery’s fab tasting room, The Shanty, hasn’t fully reopened yet post-COVID, it is taking to-go orders and hosting sit-down cocktail service on a first come, first serve basis.

If “clear” to you means vodka, I’d suggest taking a 30-minute side-trip via subway or livery cab to micro-distillery Our/New York, whose West 26th Street bar was scheduled to reopen by the time you read this (motto: “Big Apple. Small batches. Exceptional Smoothness.”). Try its small-batch vodka neat or in a cocktail and do so knowing that you’re imbibing in the first distillery to be opened in Manhattan since Prohibition. I think that’s worth a cheers!

If you decided to stay in Brooklyn—or even if you didn’t—I would add two final stops to your Kings County distillery crawl: All-Wise Meadery and Enlightenment Wines. Both All-Wise, which was founded by former child celebrity Dylan Sprouse, whose twin brother Cole stars as Jughead Jones on Riverdale, and Enlightenment offer different delicious takes on the fermented-honey-made alcoholic beverage that’s at the center of a monstrous new movement. While there’s no tasting room at All-Wise itself, you can pick up bottles at The Natural Wine Company, just a 10-minute walk from the distillery, or order them online. Enlightenment, on the other hand, is offering pours at its meadery; or you can buy glasses and bottles of its barrel-aged dry, sparkling and botanical meads at Honey’s, its bar and tasting room in East Williamsburg.

You could wait until September to plan your next Broadway-busting trip to NYC—or you could just dive right into a boozy flight of fancy this summer! (No one says you can’t return in the fall.) And the best part? The city’s safe, sanitary subway will serve as the world’s most reliable designated driver. You’ve already taken a bite out of the Big Apple. Now’s the time to take a sip.

Alexandra Baackes
A native of Latham, Alexandra Baackes is a travel influencer and blogger, whose work can be found in Capital Region Living, Forbes and Men's Fitness, as well as on her travel blog, Alex In Wanderland.