The Hotel Edison certainly has a magnificent history and, like its namesake, a true piece of an American entrepreneurial dream with the added benefit of NYC allure. Hotel Edison has reigned from the neighborhood since the 1930s, and that neighborhood just happens to be Time Square! Walk the neon square, then simply turn the corner and you are home while you stay in this effervescent Big Apple. 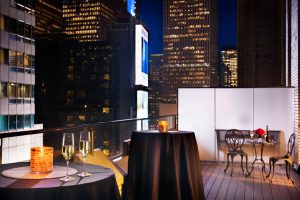 The fabled history
In the early 1930s, this Hotel Edison created the remarkable design very grandly aided in New York City’s Art Deco era along with its neighbor, the Radio City Music Hall. Thomas Alva Edison himself turned on the lights at the grand opening of Hotel Edison. The hotel proudly holds the name of the famed American inventor to this day. Through the late 20th century, the New York City hotel’s familiar spaces netted screen time in Hollywood hits like “The Godfather” when the Hotel Edison’s hallway appears in a dramatic scene and “Bullets over Broadway” when Jack Warden and John Cusack walk through the hotel. In 2014, one of my favorite Michel Keaton movies filmed in the hotel restaurant, The Rum House, for the Oscar-winning Birdman.

Reinventing The Edison (pardon the pun)
Fast forwarding to 2018 and after some years of not always favorable reviews, The Hotel Edison has once again cemented its prominence as a premier hotel in New York City and has to be seen to be appreciated. The many renovations, modernization, updates, and improvements are very impressive, showing that the will and determination to once again claim the crown of Times Square hospitality is strong.

Now, each of the hotel’s rooms and suites— Signature and Classic alike—are there to relax and revive the guests from the busy streets below. It is so much fun to be a part of the activity surrounding Times Square and then crash for a while or nap and refuel to enable you to hit those awesome streets again. 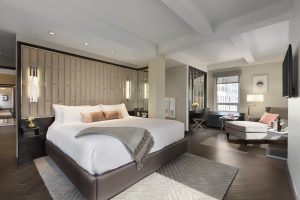 In the upcoming year, more of the older rooms will be updated to Signature rooms but with all the marble and art deco that has made this hotel such a gem. It is almost like two hotels in one—the Classic and the Signature—and with the charm of yesteryear. The Signature rooms are progressing into the future with state-of-the-art conveniences hotels are building into their designs.

You can see the best of Broadway within a few shorts blocks (which is lovely at this chilly time of the year) and eat at some of the iconic restaurants, also within strolling distance. If it is true that it’s all about location, location in business, The Hotel Edison has that times ten.

On-site features like expert concierge, 24-hour business and fitness centers, and a full-service transportation desk are also available, as are the on-premises restaurants, Bond 45 New York, The Rum House and the famous and aptly named Friedman’s At The Edison. Newly opened, Friedman’s is a family-operated businesses with locations throughout Manhattan. Butler Hospitality is a new, progressive room service concept being offered that combines New York City’s best culinary talent with high-quality ingredients and highly-curated menus.

The trip from the Capital Region
From our Capital District area, the driving and parking options at the Hotel Edison are terrific. You can drive to NYC and receive up to 20 percent off overnight accommodations as well as complimentary parking in Times Square, which is beyond convenient and often impossible. You will be near all of the Broadway shows, award-winning restaurants, and experience all that midtown Manhattan has to offer. Amtrak, of course, would love to have your business as well, where you can sit back and relax as you pass some sites along the Hudson that many of us take for granted.

Guided neighborhood walking tours are another unique offering at the hotel, and I have often found that the more I go to NYC, the more I learn what I didn’t know. Manhattan is a city of neighborhoods, and this neighborhood tour just so happens to take place in the center of the world. What an awesome guided tour that makes.

As part of Triumph Hotels, The Hotel Edison has once again become a place where experiences made only in NYC can happen and serves as a constant in the neon jungle of glorious Times Square. Hotel Edison 228 West 47th Street (between Broadway & 8th Avenue) New York, NY 10036 Phone: 212.840.5000 edisonhotelnyc.com

How to Age Gracefully Into a New Year