Rev up the local economy by hitting up The Friendly City’s top hotels, restaurants, clubs, bars and more.

Throughout this year, Capital Region Living magazine will be focusing in on different cities in and around the Capital Region. We’ll take you on a tour of all the top restaurants, bars, clubs and hotels in town—as well as introduce you to some of the city’s most memorable residents. This month, we’re taking a closer look at The Friendly City, Hudson, NY.

Wm. Farmer And Sons
Wm. Farmer and Sons is basically its own tiny city within the City of Hudson, sporting a restaurant with full dinner menu that sides on the inventive (see: Snail Lasagna) and bar, which includes everything from cocktails and rum flights to an array of low/zero-proof drinks. But the true belle of the ball is Wm. Farmer and Sons’ hotel, divvied into three distinct sections: The Merchant House, which sports five rooms and a secluded back garden; the main building, a 1830s Mansard-style building, with seven guest rooms and suites directly above the restaurant and bar; and four annexed suites, which are roomier and perfect for extended stays (like, if you turned a three-day weekend into Hudson house-hunting).

Rivertown Lodge
For those interested in a cozy, retro vibe, The Rivertown Lodge, which served as a movie theater from 1928 to 1958 and then a motel, is just what the doctor ordered. Its 27 rooms, which range from about $200-$500 per night, each come equipped with Papillionaire bikes to borrow for cruising around town. Social butterfly types can congregate in the Lodge’s open-plan lobby, and the hotel also includes an artisanal souvenir store; screened-in porches for cocktail hour; and a 24-hour pantry offering locally sourced snacks and beverages.

Swoon Kitchenbar
There’s literally no way you’ll walk out of Swoon Kitchenbar without wanting to get down on one knee and propose marriage to its deep menu, packed to the hilt with skillfully prepared dishes made with
farm-fresh veggies and grains, with standouts such as Crispy Sweetbreads and Grilled Bluefish. And now you can have a throuple: Swoon has a sister restaurant, Le Perche, which serves French fare and has a wood-burning bakery to boot. Très bon!

The Maker
Hudson is 2.5 hours from the bright lights of Manhattan—and 5-10 additional minutes, depending on traffic, from the trendy bits of Brooklyn—and The Maker, which sits on the city’s shopper’s-paradise main drag, Warren Street, captures the Big Apple vibe to a tee. It’s actually a four-in-one deal: The Maker’s restaurant boasts a mouthwatering, four-dollar-sign menu of expertly crafted fare; its cocktail lounge, which sits inside a 19th-century carriage house, a menu of whimsically monikered concoctions and small plates; and its café, a battery of breakfast items, sandwiches and salads, as well as to-die-for baked goods from Ghent, NY’s Bartlett House Bakery. If that weren’t enough, The Maker will be opening its own hotel in May. 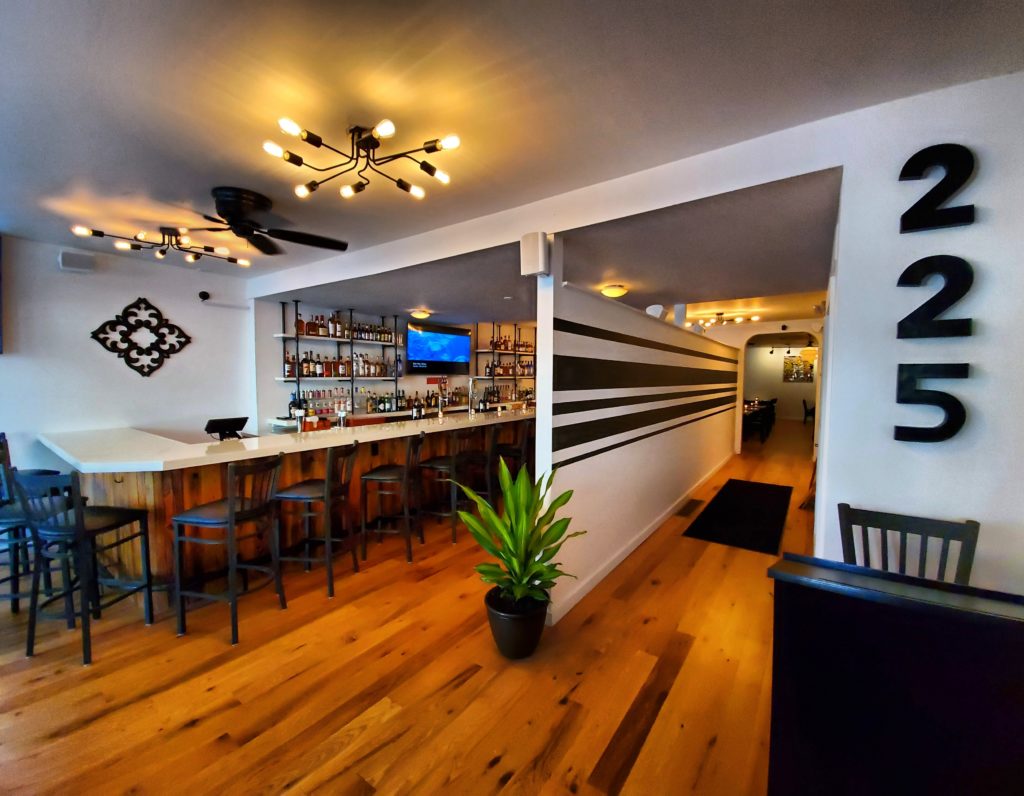 225 Warren Bar & Grill
It should be a requirement that every city has at least one restaurant-bar where you can get comfort food—Reubens, French dips and BLTs—and a tall pint of beer, stiff drink or mocktail, if that’s what you prefer. 225 Warren Bar & Grill is that exact place for Hudson, and thankfully, it doesn’t have the usual sports bar aesthetic: It has a trendier look, so you’ll feel hip even if you’re drowning your sorrows in suds.

Club Helsinki
One of the top music venues north of New York City, Club Helsinki has made a name for itself booking the best in folk, alternative country and indie rock since the late 1990s. (Past masters have included everyone from Yo La Tengo and Ralph Stanley to late legends Levon Helm and Pete Seeger.) It’s not just about amps and guitars, though: Club Helsinki also has a restaurant, popular with couples; and an events space, if any of those couples decide to, in the sage words of Beyoncé, “put a ring on it.”

Hudson Brewing Company
With the craft beer industry booming up and down the East Coast, it makes sense that Hudson would have its own brewer extraordinaire. That would be Hudson Brewing Company, which features a rotating cast of beers in its taproom, including award winners such as the Tainted Senorita Coffee Stout and Wayward Woman Kolsch (the brewers also get dad-joke naming points for Orange You Glad It’s a Summer Ale). Did we mention it’s a live music venue, too?

Lawrence Park
Sing it with me, Capital Region: “Red, red wine…stay close to meeee.” (For those of you not old enough to get that reference, Google “UB40.”) While Lawrence Park has light bites (see: pretzels, pickles and deviled eggs), tapped beer and cocktails, it’s really best known around town for its extensive wine list. Whether you get it by the glass, the bottle or from its taps—they aren’t just for brews—Lawrence Park lives up to its “oenophilic sanctuary” self-descriptor. 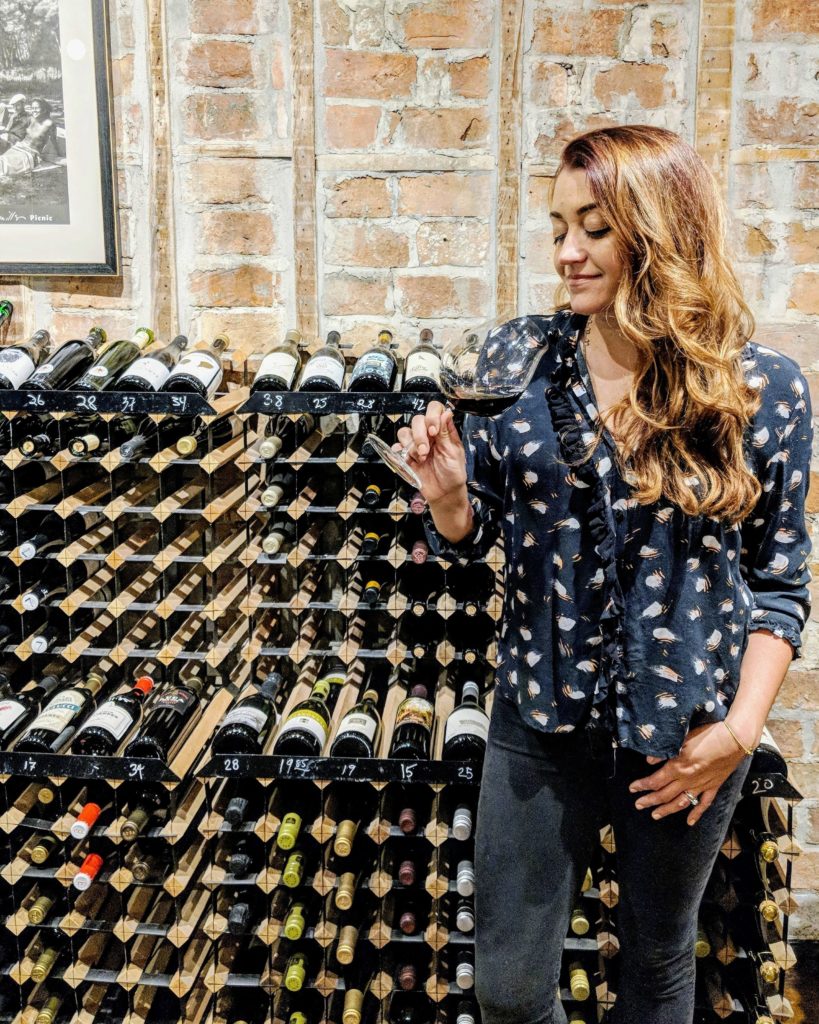 Get To Know…
Hillary Zio, Author, Educator and Wine Expert
Hudson’s a happening city—this much we know. And before COVID-19 decided to creep in and muck everything up in New York State, it also had a black belt in wine. Who better to demystify the Hudson wine scene than Hillary D’Argenzio, an author (see: The Unfiltered Guide To Working In Wine), educator (she’s a certified sommelier) and all-around expert in all things (Hudson) vino. (She actually goes by Hillary Zio.)

Zio got hooked on wine about 15 years ago, when she met her future father-in-law, a winemaker at D’Argenzio Winery in California’s Sonoma wine region. And after living in New York City for more than a decade and working in all manners of the culinary business—retail, wholesale, restaurant—she and her husband relocated to Hudson. “I was really impressed with the wine scene as far as restaurants and bars go,” says Zio. She rattles off a bunch of can’t-miss wine spots around the city: Hudson Wine Merchants, Lawrence Park (see above), Rivertown Lodge (ditto), The Maker (double ditto) and Backbar.

As far as the greater Hudson Valley is concerned, Zio tends towards the wineries in the Newburgh/Marlboro, NY area, with her favorites being Fjord Vineyards, which has great dry Rieslings; Benmarl Winery, which makes a delicious Sauvignon Blanc; and Wild Arc Farm, known for its piquette, a magical elixir made from the leftover grapes used in the winemaking process. 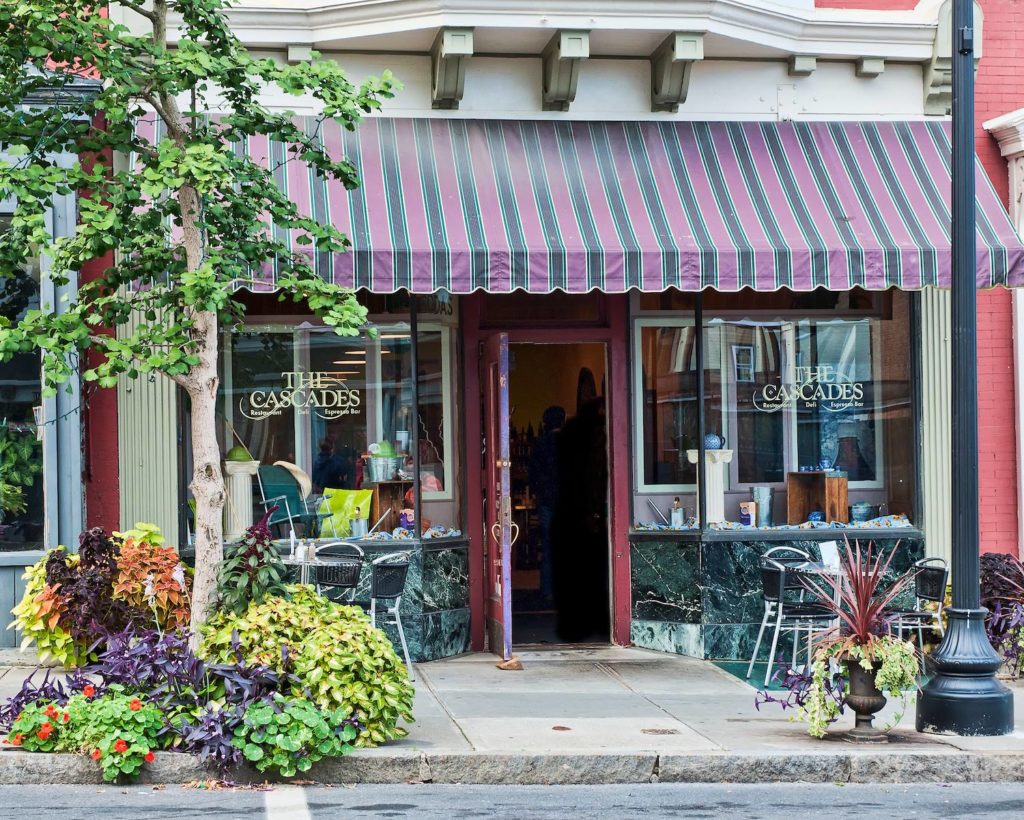 Get To Know…
Bob Lucke, Owner of The Cascades Restaurant
A little over 30 years ago, Bob Lucke (aptly pronounced “lucky”) started his cross-country trek from Seattle to Hudson with his wife (originally from Westchester County) and newborn daughter. After settling there, and opening and closing a much bigger, busier restaurant, Lucke took another stab at the food biz and landed on perfection: The Cascades, a breakfast-and-lunch-only spot on Warren Street, known for its soups and sandwiches and affable staff. (The restaurant also does catering.) Back then, though, it was a much different city than it’s become today. “It’s been a trickle effect; in the first 10-15 years, a lot of people moved up from the New York City area and opened up businesses,” he says. “Block by block, Hudson started to fill in, because when I opened up here in ’93, we were way downtown; there wasn’t much around me.”

Lucke sees a lot of what makes Hudson known as “The Friendly City” come through his front door. “We’re right around the corner from the courthouse, so we always have a good mix of clientele,” he says, which includes locals and day-trippers.

All blips in the economy and worldwide pandemics aside, Lucke’s bullish on Hudson’s future. “We’ve survived enough mini-downturns in the market and scares, and I think we’ll get through this one, too,” he says. “We’ll end up on the upside when it’s all over, because there’s a lot of energy and talent in this town, and I see the future here being very bright.”

Will Levith
Will Levith is the editorial director of Capital Region Living and Saratoga Living.