Before You Go: ‘Is Anyone There?’ 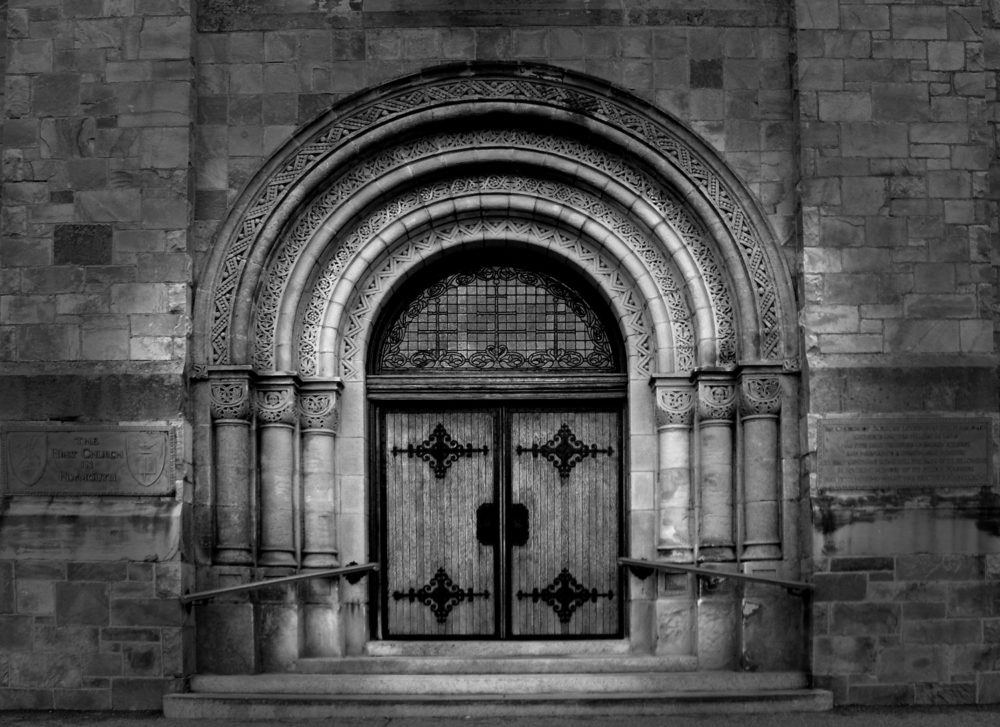 Raylan moved into his one‐bedroom apartment assuming it would be empty. Instead, he found boxes in the closet taped shut and marked, “please donate.” He pried one open and found clothes that someone had left behind. Raylan had noticed a church around the corner when he parked his car, so he took the boxes over first thing in the morning to donate.
When he got to the church, he gave a tug on the big wooden doors, but they were locked tight. A voice in the shadows said, “They don’t open until 10, but you can leave the boxes at the side door, and the priest will take ‘em.” Raylan saw that a man in a brown leather bomber jacket was the one offering advice, so he nodded, followed his instructions and dropped them by the door.

As he went to leave the man half‐hidden by shadows said, “Yep, the church opens at 10 and closes at 5 every day. Which is good because you don’t want to be in there at night. Not after dark.” Raylan tried to ignore the man’s odd warning, but curiosity got the better of him, so he asked, “Why don’t I want to be in there after dark?” The man leaned into the light now and with his stained yellow teeth smiled a creepy grin and said, “Because it’s haunted.”

Raylan had enough of this silliness, so he left. The next day as he walked by the church he saw the same man still lingering in the shadows, so he approached and asked, “Haunted how?”

The man told Raylan that he once had a drinking problem and spent many nights in the homeless shelter. The only rule at the shelter was that you couldn’t bring alcohol in, but there were times when he didn’t want to abide so he’d sneak into the church and hide until they locked up, then spend the night sleeping in a back pew. It was uncomfortable but warm and quiet. Well, usually quiet.

He said, “One night I’m sound asleep, and at the stroke of midnight after the bells chime, an old priest appears on the altar. He shouted out what sounded like ‘Quiz M Est.’ I just stared at him, scared out of my mind, and didn’t say a word. He yells it out two more times into the dark empty church, ‘Quiz M Est, Quiz M Est,’ and then he disappeared.”

Raylan wondered if the man was drunk right now but before he could speak the stranger continued, “A few days later I slept there again, and it happened again, right at midnight. Same priest, same weird language, shouting it out three times.”

Raylan asked him if it was the priest who ran the parish and the stranger said, “No, no, that’s Father James. He’s like 50 years younger than this guy. Plus this man didn’t dress like priests today; he looked ancient.”

Raylan asked, “So, what happened next?” The man smiled that awful grin again and said, “I ran for my life, that’s what happened next. And I didn’t go back until I shared my story with a couple of guys at the shelter.”

“So I’m telling them what happened in the church and Mr. Matthew, the guy who runs the shelter, overhears me and says, what did you say the priest shouted? So I tell him it sounded like ‘Quiz M Est.’ It turns out Mr. Matthew studied Latin in college, and he says to me, ‘It sounds like he’s saying ‘Quis Enim Est,’ which means, ‘is anyone there?’”

The strange man continued, “I says to Mr. Matthew, ‘SO’? And he says right back to me, ‘So, answer him ‘Ego Edsum,’ which means I am here.’”

Raylan was on edge, asking, “And did you? Did you go back?”

The man said, “I did right before Halloween. And at midnight there he appears out of nowhere. He shouts his words in Latin ‘Quis Enim Est,’ and I scream back ‘Ego Edsum.’”

Raylan was shouting now: “AND?”

“And he opens a Bible and delivers the entire mass in Latin. When he was done, he closes the book and vanishes.”

Raylan was stunned silent as the man in the leather jacket said, “I gotta go. Remember, never after dark.” With that, he backed into the shadows and left.

The next day Raylan returned to the church and found the pastor, Father James, in the rectory. He told him the ghost story the man shared, and the priest said, “We haven’t said the mass in Latin in a hundred years. Now who is this man who told you about this?”

It was then Raylan glanced over to the wall, which was covered in photographs, and saw a black and white one of the strange man with the yellow teeth with his arm draped around an old priest. “Him. That’s him!” Raylan said.

Raylan felt a chill go up his spine and heard a creepy voice in his head saying, “Not at night, never after dark.”

It was followed by an evil laughter that chased Raylan all the way home.