Need ideas for how to spend your Capital Region summer? Here are 10-plus ways to have a blast.

Now that the pandemic’s basically become an after-thought, we decided to reinstate the Calendar section in our magazine, to act as an additional source of great goings-on throughout the Capital Region (for everything else, check out or upload your own event to our brand-new Events page). Here are some must-see events coming up in the next few months.

SPAC sure has a star-studded Live Nation lineup for its comeback season (see: Daryl Hall & John Oates, Alanis Morissette and the Jonas Brothers). But it’s hard to outshine Chicago, one of the longest-running, best-selling music groups of all time. The 10-man band, which still tours with three of its founding members, will swing through the Spa Park on July 18 to play a set of their greatest hits. (Fingers crossed for “Hard to Say I’m Sorry” and “Will you Still Love Me?”) You won’t be able to look away. spac.org 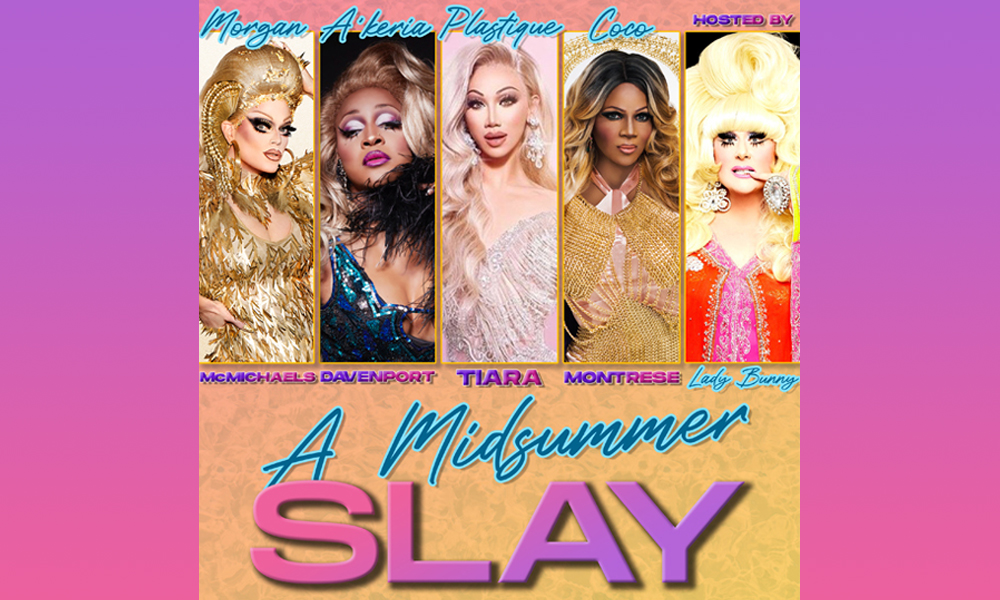 A Midsummer SLAY: The Slequel!
The Palace Theatre

Albany got a taste of A Midsummer SLAY’s divas back in 2019, and this July 23, the drag-tastic crew returns to the Palace for the much-anticipated “slequel.” Hosted by Lady Bunny, the show will star Manila Luzon, Shea Couleé, Coco Montrese, Morgan McMichaels and Landon Cider, who’ll be serving up luscious looks and fierce realness all night long. palacealbany.org 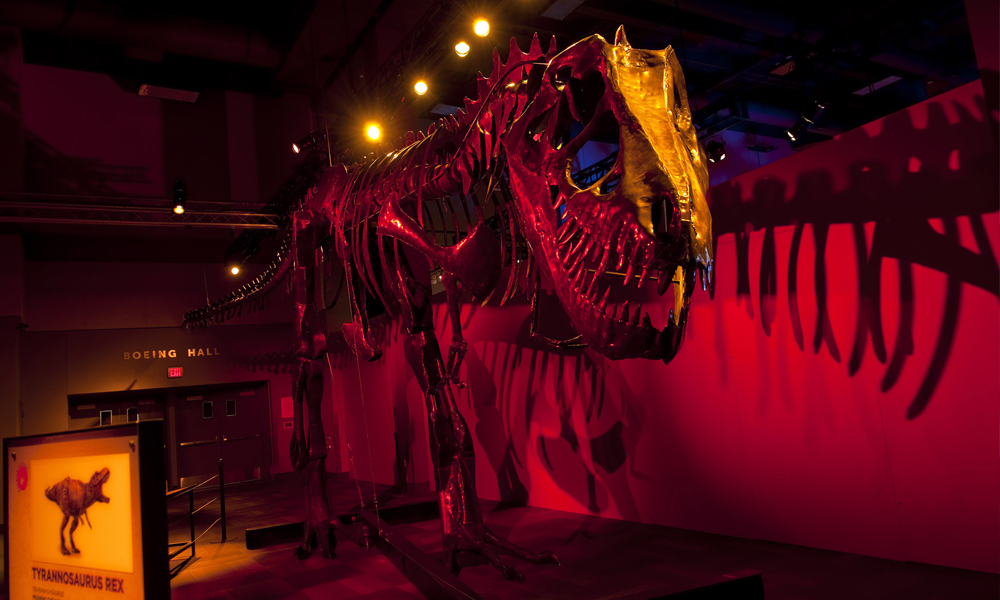 This summer, explore the future of science, technology, engineering, art and mathematics (or STEAM) by stepping back, oh, 66 million years. Fourteen recycled metal dinosaur sculptures with exposed mechanics will descend upon Saratoga’s Universal Preservation Hall this July 25 and stay through mid-October. As visitors make their way through the interactive exhibit, they’ll be able to take part in art (sketching, drawing and sculpting); science (kinetics, biomechanics and robotics); and innovation (observing and experimenting) activities aplenty. universalpreservationhall.org 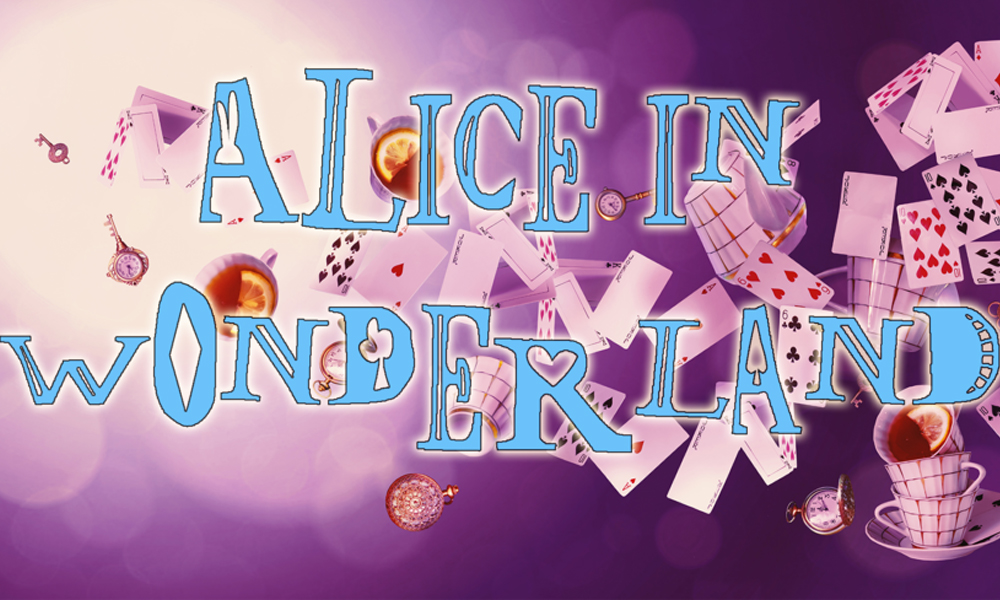 Bring your little ones through the looking glass this summer at the historic Cohoes Music Hall. Watch as Lewis Caroll’s classic story of a young girl’s fantastical journey through Wonderland is brought to life in a musical adaptation featuring a cast of local students. thecohoesmusichall.org 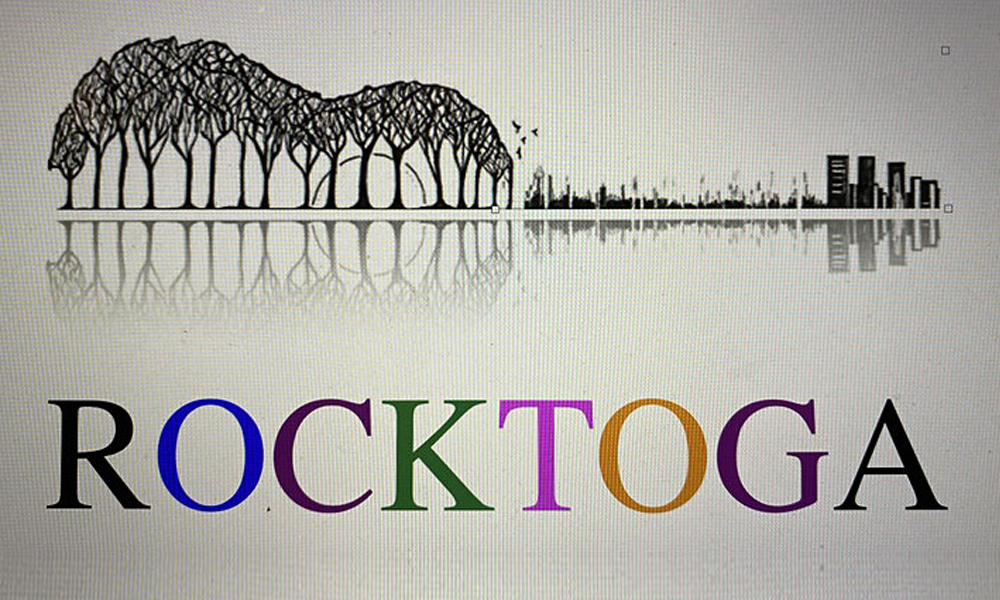 Family-friendly fun for a good cause? Sign us up! The inaugural ROCKTOGA benefit for Albany Medical Center’s Children’s Hospital is coming to the Malta Drive In on Sunday, August 1 from noon–6pm. Bop to music by local favorites Grand Central Station, Big Sky, Jocamo and Superposition, and nibble on food truck bites while the kids have a blast in the onsite bounce house. The afternoon will also feature raffles—including one for an electric guitar—stock car displays and a celebrity special guest (who could it be?). Proceeds from the event will go to the Melodies Center for Childhood Cancer and Blood Disorders at the Bernard & Millie Duker Children’s Hospital at Albany Med, which provides care for children and teens with cancer and blood disorders in 25 nearby counties and beyond. Admission is $25 a car in advance or $30 at the door. Search “Rocktoga Charity Event” on eventbrite.com

Get to know your local police officers and firefighters at Clifton Park’s 17th annual National Night Out this August 3. Part of a nationwide community-building campaign to promote police-community partnerships and neighborhood camaraderie, this National Night Out celebration will feature demonstrations by law enforcement K-9s, preparedness displays and safety information, plus crafts and games for the whole family. cliftonpark.org 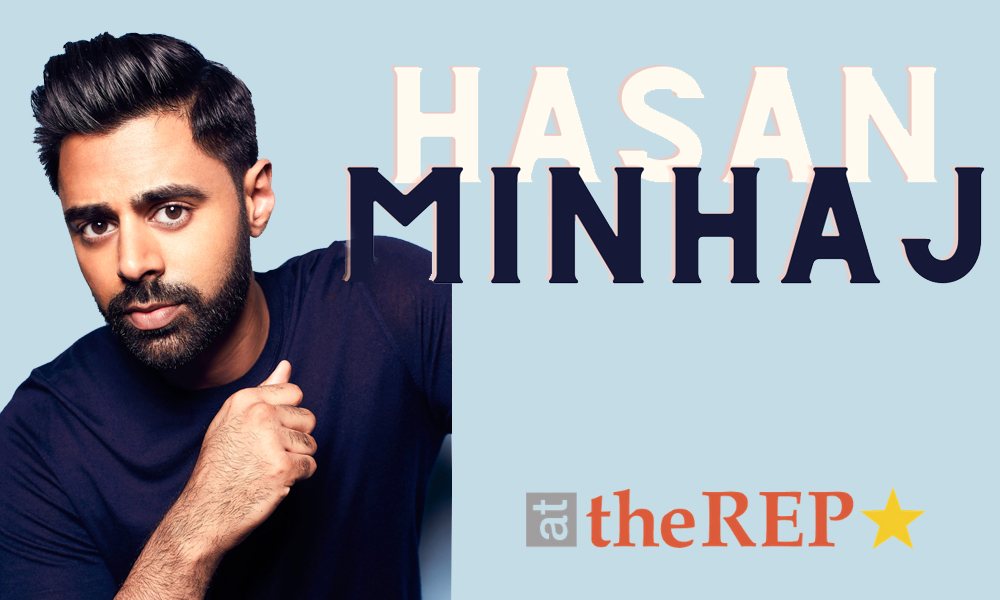 Comedian Hasan Minjah of The Daily Show and Netflix’s Patriot Act with Hasan Minhaj will bring his comedic take on the modern cultural and political landscape to The Rep in Albany for six shows between August 5–8. A Peabody Award winner, Hasan has earned rave reviews for hosting the 2017 White House Correspondents’ Dinner and Hasan Minhaj: Homecoming King, his one-hour Netflix comedy special. Shows are at 7:30pm on August 5; 7pm and 10pm on August 6 and 7; and 3pm on August 8. capitalrep.org 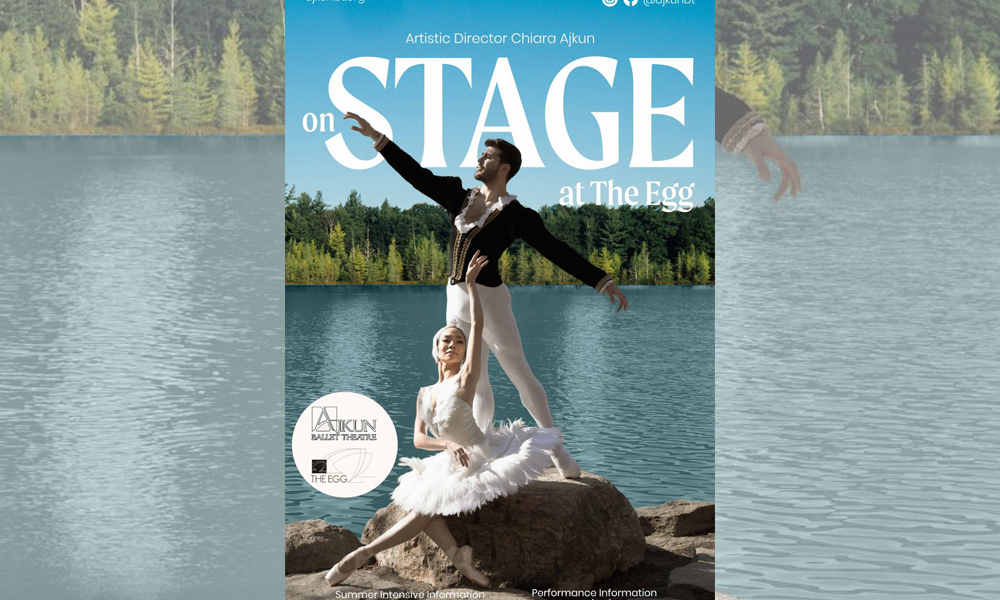 Witness Swan Lake in Albany’s most recognizable entertainment venue. New York City’s internationally renowned Ajkun Ballet Theatre will perform the classical ballet at The Egg on Saturday, August 7 at 7:30pm. Watch as Tchaikovsky’s tale of a woman-turned-swan’s quest to find faithful love comes to life by way of artistic director Chiara Ajkun’s choreography and the dancers’ remarkable artistry, athleticism and elegance. Tickets are $35 in advance or $40 the day of the show. theegg.org

Back after a year hiatus and celebrating its 100th anniversary is Thoroughbred auction house Fasig-Tipton’s much-anticipated Saratoga Sale. Happening smack dab in the middle of the Saratoga Race Course season, The Saratoga Sale is considered the crown jewel of the North American yearling sales calendar, with horses regularly selling for upwards of $1 million. And no, you don’t have to be a seller or buyer to attend. fasigtipton.com 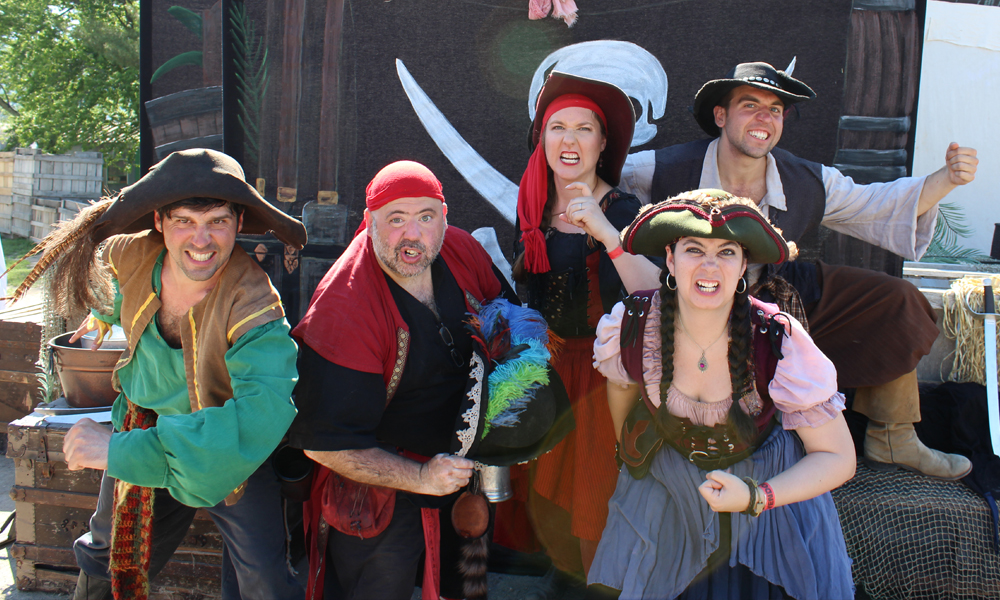 Pull out your tunic and puffy shirt and dust off those dancing shoes: The NY Capital District Renaissance Festival is returning to Ye Royal Village of Appleton (a.k.a. Indian Ladder Farms) for two days of music, entertainment and food. This year’s fest will feature the Queen’s Royal Joust, a Shakespeare impersonator, a comedy sword-fighting show, belly dancers, Pester the Jester, a princess tea party, falconry and an arrr-my of pirates. The royal shenanigans will take place from 11am–6pm on both Saturday, August 14 and Sunday, August 15. nycapitaldistrictrenfest.com

The Prescott Foundation’s Wings & Wheels
The Hangar at 743

Well, hang me up to dry—the Cold War Kids (whose summer anthem is, yup, “Hang Me Up to Dry”) will be one of the first acts to perform at Albany’s newest entertainment venue, Empire Live. Located in the old Capital Rep building on North Pearl Street, Empire Live is the next iteration of former Clifton Park concert venue Upstate Concert Hall. The indie rock band will take the stage on August 26 at 8pm, and general admission tickets are $28. empirelivealbany.com

The Altamont Fair, taking place August 17–22, isn’t the only fairground-worthy festival coming to Guilderland’s little sister this summer. Celebrate your Scottish heritage (or, if you’re not Scottish, pretend you are for a day!) at the Capital District Scottish Games, which has been a fixture in the region for more than 70 years. The event will include bagpipe bands, highland dancing and athletic competitions (think hammer throwing and caber tossing), vendors, kids activities, overnight camping and, of course, kilts galore. Tickets range in price from $18 for general admission to $140 for entrance into the patron’s tent. scotgames.com

Grab a Jack Burger and Twister Fries from Jumpin’ Jacks Drive-In then head just next door to Freedom Park for a free concert! The riverside venue will be highlighting local performers, such as Annie & the Hedonists, Ellen Sinopoli Dance Company and SIRSY, at 7pm on select days all summer long. freedomparkscotia.com

Schenectady’s Jazz on Jay will be bringing the region’s best jazz music to the corner of Jay and State streets on Thursdays through September 23 from noon–1:30pm. Catch the Jon LeRoy Trio on July 29, the Henry Fernandez Quartet on August 19 or the Maggie MacDougall & Bossamba on September 9…and park for free in the nearby MVP Health Care parking garage. facebook.com/jazzonjay

Be sure to bring a lawn chair with you to Cohoes’ summer concert series, Rock the Block, at Canal Square in Cohoes. The Thursday evening series runs July 8 (The Refrigerators) through August 5 (Funk Evolution), with shows starting at 6:30pm. Food and beverages will be available for purchase. ci.cohoes.ny.us

There’s something for everyone at the Powers Park Concert Series—classic rock, country, dance music and more. Shows are 6-8:30pm on Saturdays in July and August, with featured bands including Skeeter Creek on July 31 and Wild Adriatic on August 14. facebook.com/powersparkconcerts

Every Thursday at 6:30pm through August 26, join the Schaghticoke Entertainment Committee for a concert at Town Hall. Catch Beatle Guyz on July 22, Storm Front on August 19 and the Refrigerators with Maria Formica from The Voice (plus fireworks!) on August 26. townschaghticoke.digitaltowpath.org

Perhaps the Capital Region’s best-known free concert series, Alive at Five, returns to Jenkins Landing on Wednesdays this July. See Hartley’s Encore and Yim Yam on July 21 or Warrant and Joe Mansman and The Midnight Revival Band on the 28th. Not able to attend? Watch a recording of the show, which will be made available the following day on the Albany Events Facebook page or YouTube channel. albanyevents.org

Village of Coxsackie Music in the Park

On Sundays at 6pm this summer, venture down to Coxsackie Riverside Park to see acts such as Night Moves (classic rock/country), Wyld Blu (blues) and The Reverberators (rock and roll) as part of the Village of Coxsackie’s Music in the Park series. greatnortherncatskills.com

The only problem with the abundance of concerts going on this summer at Shepard Park will be deciding which ones to attend! Choose from the Lake George Arts Project performances on Wednesdays, the Lake George Community Band performances on select Thursdays, Magical Musical Mondays, Tuesday Tributes and Fridays at the Lake concerts, among other special events, all summer long. lakegeorge.com