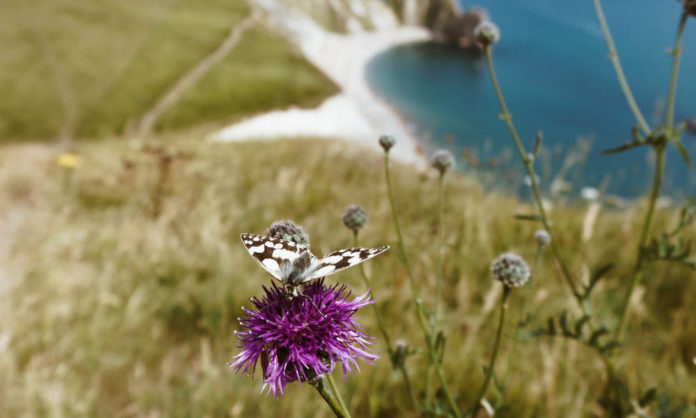 This is the story of a boy named Marty Magoo.
While some contest its veracity, I swear his story’s all true.
Summer camp at lake ‘Shake-a-Leg’ arrived with the usual glee.
Yellow busses with children all anxious to see,
who they might be living with at these castles on the sea.

Sixty boys and girls, fresh as the dew,
and one thin mint known as Marty Magoo.
Soaking wet, he tipped the scale at barely 82.

The counselors named the cabins after the states,
and Marty’s was Oklahoma, the boy could hardly wait.
Gents in one cabin, ladies in the other,
a rickety groundskeeper named Pappy playing role of a mother.
There were crafts, sports and swimming galore,
all the things one would expect to find at the shore.
Yet it was at assembly each day at four,
where Marty held the door,
waiting for something more,
a face he grew to adore.

Schuyler Tyler was her name,
compared to the others, not quite the same.
Pretty? Of course, but there was something more,
a kindness inside that gave her allure.

Every boy sought Schuyler’s attention,
but she was not there for that, not seeking detention.
She came as children do, to play, have fun,
and that meant spending days in the sun.

Her brown skin getting browner, her smile growing wider,
every boy in the camp still trying to get beside her.
The three-legged race was a sight to see,
boys jockeying to be her partner, hoping to turn she into a we.
And off in the distance, shy Marty Magoo, wishing it was he.

But old Pappy was the wiser and kept the boys at bay.
When one lad named Chad got pushy, he made him bail hay.
That mistake had him swinging a pitchfork all day.

Supper was another chance for boys and girls to mix,
short tables lined the mess hall, each one holding six.
Yet when Schuyler found her seat, they somehow held more.
As the boys snaked to get near her, there was Marty still holding the door.
He did that for every camper, a kind child for sure.

The girls liked Schuyler because she paid the boys no mind.
She preferred making bracelets and campfires, singing songs to pass the time. And one other thing, to which everyone was blind.

She liked sitting in the meadow, not far from the lake,
watching the butterflies flutter, then land, in the hot sun they’d bake.
Then up again they’d flitter, disappearing in the sky,
just as the horn would sound and a counselor would stop by.

“Daydreaming again?” they’d ask, before turning to go.
And scoot to the cabin, Schuyler would, yet one thing she didn’t know,
was the boy watching from the safety of the pines,
admiring Schuyler’s gentleness and the dream she left behind.
Of butterflies dancing and how it made her feel.
Marty Magoo got an idea, but he’d have to strike a deal.

Each child took turns in the kitchen, helping with the chores.
Marty’s plan was to swap jobs, taking him away from the shore.
For not two miles from ‘Shake-a-Leg’ was a town that offered more.

Stores that is, filled with things not found at camp.
It was raining the morning he hatched his plot, no question he’d get damp.
Marty made it on his bike in 30 minutes flat,
the money his grandmother gave him tucked safely in his cap.

It took him six stores and quite a while,
but finally he saw it and out came a smile.
The gift now in a bag, up the hill he went,
if it made Schuyler smile, it would be money well spent.

On the last night of summer camp, everyone cheered.
Fireworks and pizza, then the moment Marty feared.
Could he really go through with it? Oh dear, oh dear.

“My name is Marty Magoo and I’ve always wanted to meet you,” he said, looking down.
Then Schuyler gently raised Marty’s chin and suddenly his frown,
turned into a grin, flipping it upside down.
He handed her the gift, brown paper for wrapping,
and other children gathered, curious what was happening.

She peeled it away and soon there was nothing to fear,
for in Schuyler’s eye, was the beginning of a tear.
It was a snow globe you see, inside a girl without care,
looking up with delight, and dancing in the air,
if you shook it just right… butterflies, butterflies, everywhere.

Thirty years later, not far from that lake,
sits a tiny stone house where two children do bake,
chocolate chip cookies for all to partake.
And on the mantle, if you give it a shake,
sits an old snow globe where butterflies still make,
the most delightful sight,
when they flutter and take flight.

And on the mailbox outside, believe me it’s true,
rests a sign with letters, all written in blue,
nine simple words with a slight pinkish hue:
This is the home of Schuyler and Marty Magoo.