The Capital City gets its day in the sun.

Throughout this year, Capital Region Living magazine will be focusing in on different cities in and around the Capital Region. We’ll take you on a tour of some of the top restaurants, bars, clubs and hotels in town, whether they’re open for business during COVID-19 or not—as well as introduce you to some of the city’s most memorable residents. This month, we’re taking a closer look at Albany—the Capital City.

Morgan State House Inn
Located in a 19th-century, New York City-style brownstone overlooking Washington Park, the Morgan State House Inn offers intimate and elegant accommodations for Capital City visitors. This quaint bed-and-breakfast has 17 individually decorated rooms, a secluded summer garden and an architectural-historical elegance not found in many boutique hotels in the capital. The inn is also particularly accommodating to business professionals: It features in-room copying, printing, faxing and even a boardroom that seats up to 12 people.

Renaissance Albany Hotel
When it comes to spending a luxurious night in New York’s capital, the Renaissance Albany Hotel is just the place to do it. Built in 1927 as the DeWitt Clinton Hotel, the Renaissance Albany boasts a mix of classy Art Deco-style charm and contemporary style and amenities. Located just steps from the Times Union Center, the Albany Capital Center and the Empire State Plaza, the Renaissance is perfectly positioned for exploring some of downtown’s trendiest neighborhoods. Or, if you just want to stay in, you can enjoy the hotel’s own Wellington’s Restaurant, which offers gourmet, small-plate American fare, with spectacular views of the city’s skyline. 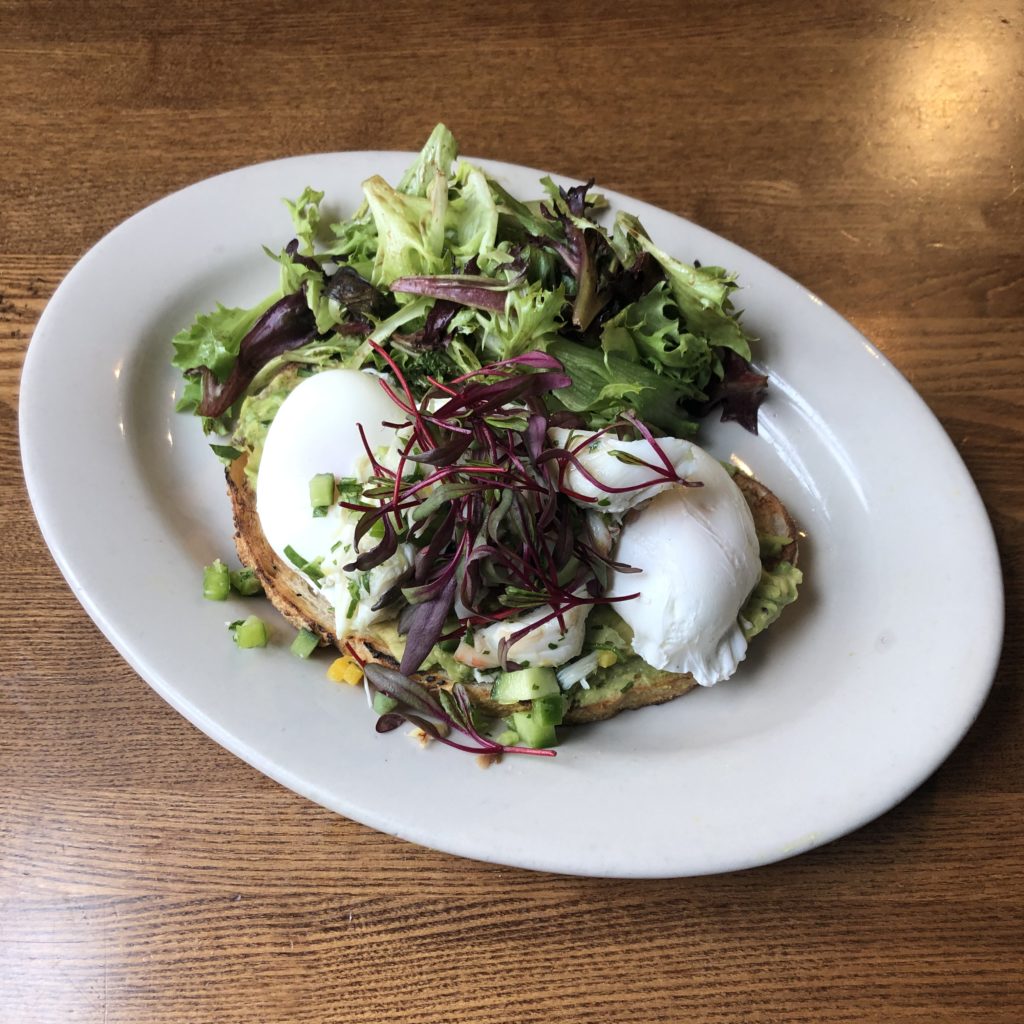 Iron Gate Cafe
Right at the edge of Albany’s historic Center Square neighborhood, the Iron Gate Cafe has a wonderfully vintage vibe, featuring framed rock albums, funky portraits of Elvis Presley and a charming garden patio with, you guessed it, an iron gate standing at its entrance. Grab one of the cafe’s famous mimosas or bloody marys and be sure to try its Johnny Cakes (three blueberry cornbread pancakes with a choice of meat) or Elvis’ Memphis Scramble (scrambled eggs with bacon and maple sausage, topped with a pepper jack hollandaise). 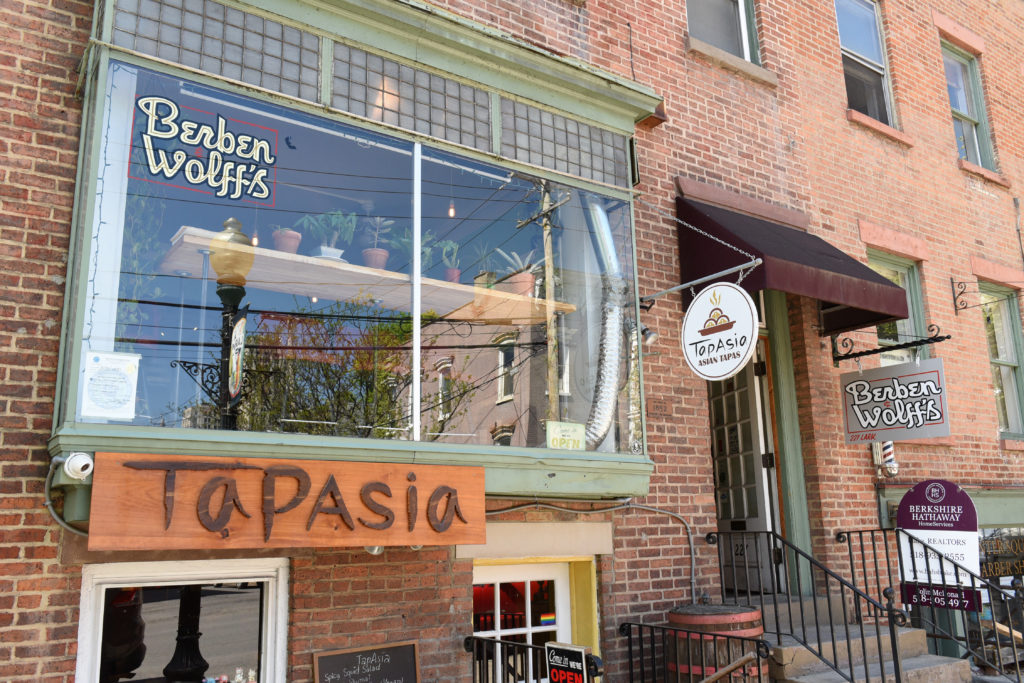 Berben & Wolff’s
Berben & Wolff’s isn’t your run-of-the-mill delicatessen. Opened in 2016 on Lark Street, this colorful takeout-or-dine-in spot offers healthy vegan versions of sinfully delicious (and caloric) deli classics. In other words, get ready to have your deli sandwich and eat it, too. Order one of the restaurant’s signature Ruebens with house-made seitan pastrami, a Cubano panini with smoked faux ham and vegan Swiss cheese, or a popcorn mushroom po’ boy filled with cornmeal-encrusted oyster mushrooms and Cajun remoulade dressing. The vegan deli was so popular among local herbivores that its owners opened a second location in Troy in 2019. 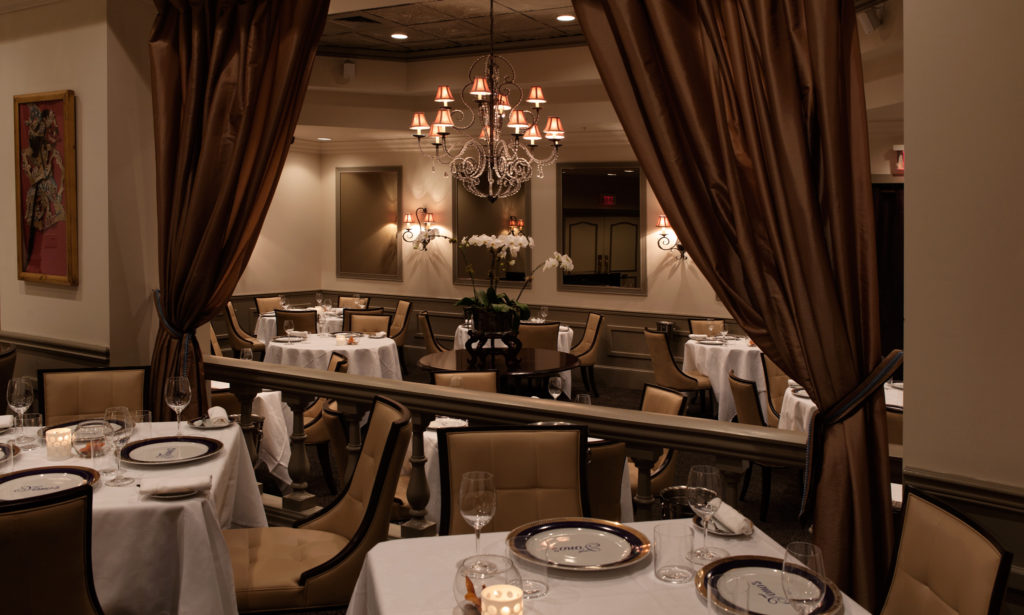 Yono’s
No culinary outing in Albany would be complete without a visit to Yono’s on Chapel Street. Recognized by the prestigious James Beard Foundation, Wine Spectator and The American Culinary Federation, Yono’s has been Albany’s go-to spot for intimate fine dining since the 15-table restaurant first opened in 1986. In addition to an 80-page (!) wine, beer and cocktail list, Chef Yono Purnomo’s iconic menu fuses traditional Indonesian ingredients and flavors with a contemporary American cuisine for an only-in-Albany, top-flight culinary experience. 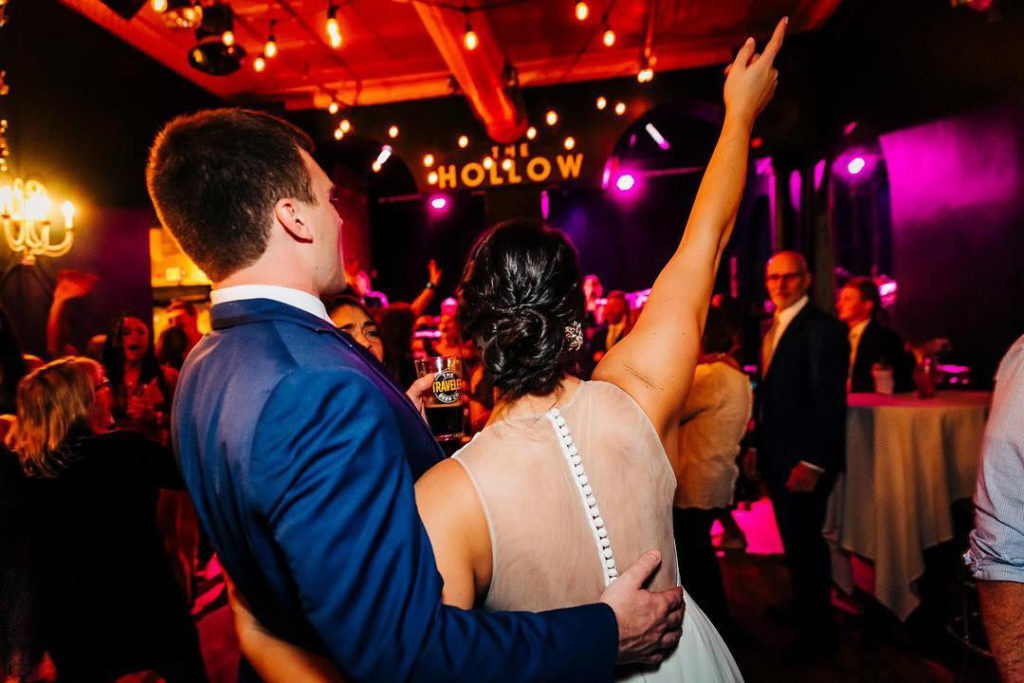 The Hollow Kitchen + Bar
Situated in the heart of Downtown Albany on North Pearl Street, The Hollow Kitchen + Bar offers a little bit…ok, a lot of everything. Known for its craft beer selection—it has more than 24 pours on tap—The Hollow also features a four-star restaurant led by Anna Weisheit, the 2016 Rising Star Chef Winner at the Albany Chefs’ Food and Wine Festival. Did we mention that The Hollow also doubles as a venerable live music venue? 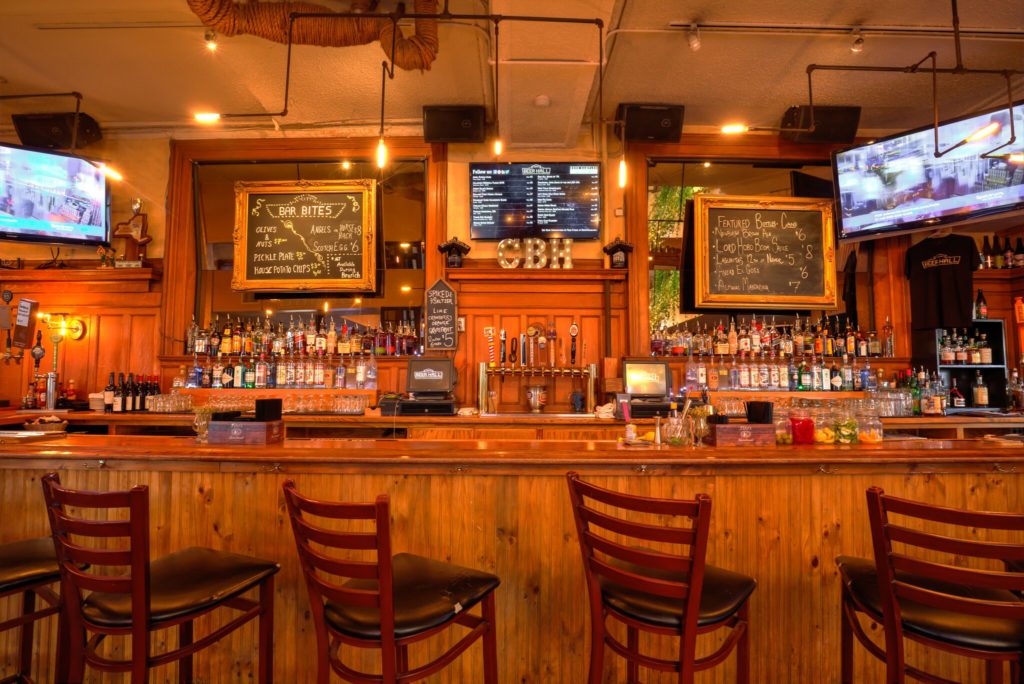 Speakeasy 518
In true Prohibition-Era speakeasy fashion, you won’t find much information about Speakeasy 518 on the internet. This lavish cocktail lounge pays homage to the roaring twenties with a seriously killer craft cocktail and food menu, flapper-worthy live jazz performances and a strict no-smartphone policy while inside. Sorry, there was no texting in the Gilded Age! 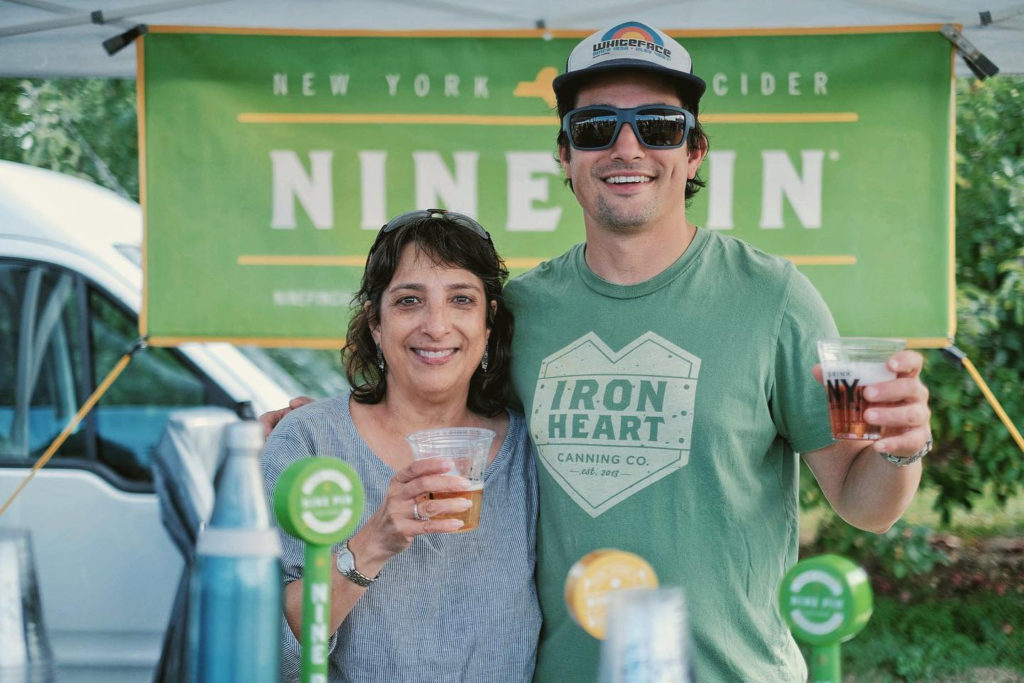 Get To Know…
Alejandro del Peral, Founder and Owner of Nine Pin Cider
Nine Pin Cider’s Alejandro del Peral knows his apples, and he should—he grew up surrounded by them. “My parents have nine acres in Columbia County where my dad was planting apple trees from seed,” says del Peral of his upbringing. “That’s quite unusual, because when you plant from seed, it doesn’t give you the same apple—a lot of them produced this fruit that was basically inedible, like crab apples.”

Since then, del Peral’s interest in apples has flourished. In 2013, he founded Nine Pin Cider, an Albany-based cidery that produces delicious hard ciders from local apple providers. The following year, Nine Pin Cider became New York State’s first-ever certified farm cidery, which allowed the local business to open its own tasting room. “It’s given us an outlet to experiment, and it really is the source of all of our creativity,” says del Peral about Nine Pin’s unique array of flavors including Earl Grey, blueberry and “Hunny Pear.” “The tasting room allowed us to try flavors and find out if the consumer really liked them first.”

Fast forward six years, and Nine Pin Cider is now available throughout New York State, Connecticut, Massachusetts and New Jersey. del Peral’s giving back, too—through his apples, of course. In 2018, Nine Pin Cider launched its Urban Orchard project, planting nine apple varieties in Albany’s Washington Park. “The Urban Orchard project is getting into the educational side of what we do,” he says. “We brought our cider-making right into the city center.” 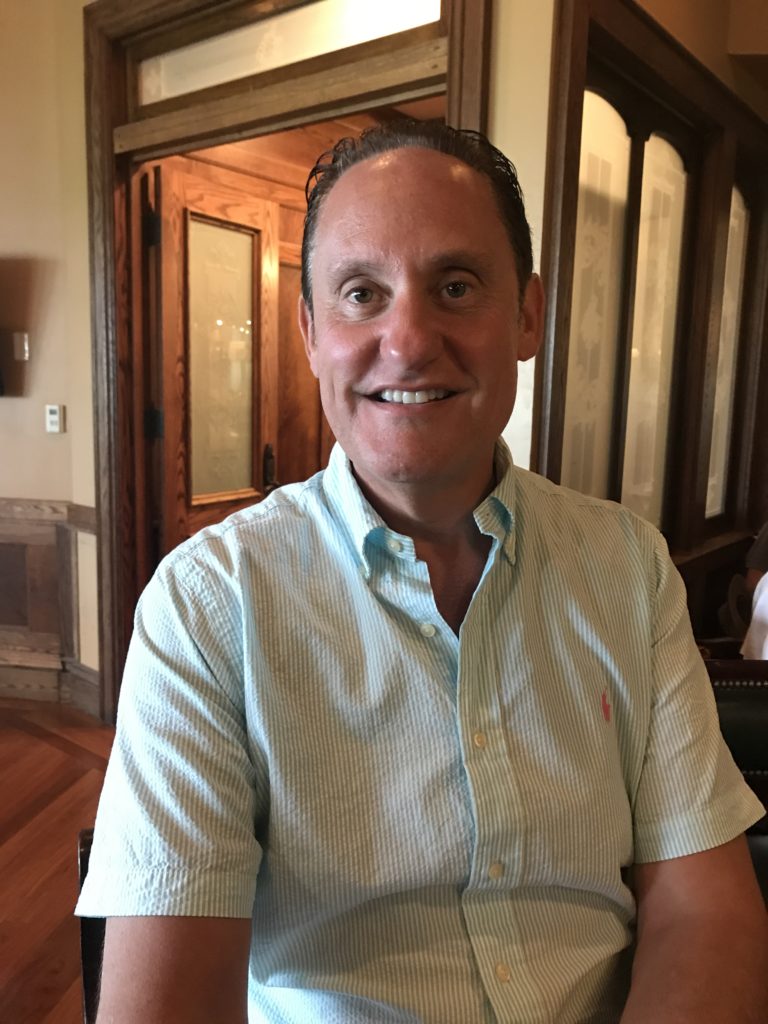 Get To Know…
Brad Rosenstein, CEO of Jack’s Oyster House
Founded in 1913, Jack’s Oyster House isn’t just one of the oldest restaurants in Albany, it’s also long been part of the cultural landscape here in New York’s capital. For decades, some of the Capital Region’s biggest politicos and movers and shakers have dined there. And equally impressive: The State Street staple has been family owned that
entire time.

“My grandfather, the original Jack, was a clam and oyster shucker in the kitchen, and he did salads and desserts too,” says Jack Rosenstein’s grandson and the restaurant’s current owner, Brad Rosenstein. Rosenstein, who earned a bachelor’s degree from Cornell’s School of Hotel Administration, may run the Oyster House now, but like his father and grandfather, he worked his way up in the restaurant. “I started out washing dishes, and I got to work with my grandfather in the kitchen, too,” he says. “When they felt I was ready to deal with people, they let me be a busboy.”

Rosenstein has never forgotten his humble but crucial beginnings in the restaurant. He says that the oyster bar’s long-term success can be attributed not only to its world-class menu designed by master chefs, but also its good old-fashioned ability to people-please. “Our game plan has always been, ‘What’s in the best interest of our guests?’” says Rosenstein. “And when I was growing up, bringing people out to dinner in Downtown Albany was a real challenge. But we did it.”

The Rosensteins certainly did do it. Over the decades, Jack’s has attracted an incredible ensemble of national figures and celebrities including legendary singers Barbra Streisand and Robert Goulet; boxing champion Sugar Ray Leonard; Pulitzer Prize-winning author and Albany-native William Kennedy; and Emmy Award-winning actor Kelsey Grammer. In 2009, then-Late Night host Jimmy Fallon, who grew up in Saugerties, visited the Oyster House after receiving an honorary doctorate from his alma mater, The College of Saint Rose. “He said he’d always wanted to go to Jack’s,” says Rosenstein. “And I said, ‘Gee, Jimmy, we were never that expensive.’ And he said that back then, even McDonald’s was expensive for him.”

Perhaps another secret to the restaurant’s success? It’s never closed. And that’s not an exaggeration. Throughout its 116-year history, the Oyster House has been closed only once–in 1987 when Jack passed away. Rosenstein says that his grandfather wouldn’t have been happy about that. “He didn’t like the idea of closing,” he says. “But my father and uncle felt it was important that the staff go to the funeral.”

Since then, though, Jack’s hasn’t closed again. The restaurant’s kitchen has even remained open for takeout and delivery during the COVID-19 pandemic. Regarding the restaurant’s post-COVID future, Rosenstein says, “We’ve got some big stuff planned. We’re just waiting for the go-ahead to open up again.”