The community is doing everything from feeding the needy to producing medical supplies for essential workers.

Well before the COVID-19 crisis shut down New York State, isolating us in our homes and closing our schools indefinitely, a group of Albany restaurant professionals was hard at work planning for the disaster that was about to unfold in the Capital Region.

Calling itself Feed Albany and launching on March 16, the collective was cofounded by Dominick Purnomo with the mission to do just what its name implied.

Since mid-March, Feed Albany has been cooking and delivering meals to groups of at-risk and in-need individuals throughout the Capital Region nearly every day. In the week leading up to Easter Sunday alone, Feed Albany delivered meals not only within the Capital City, but also to Southern Saratoga County, Rensselaer, Troy, Cohoes and Latham, serving unemployed restaurant workers, Albany’s Homeless Action Committee and the staff at Albany Medical Center. Over Easter weekend, it delivered Easter dinners and baskets to families all over Albany County.

How was a previously nonexistent organization able to do so much so quickly? “We have about 6-10 cooks and chefs who are out of work and are volunteering their time to be here to support the effort,” says Purnomo. Local restaurants such as Savoy Taproom (whose owners, Jason and Kay Pierce, helped spearhead Feed Albany), The Point, Roux and Purnomo’s two restaurants, have donated kitchen space; and local farms, including Kilcoyne Farms, have donated food. Feed Albany also received a $5,000 grant from the City of Albany, and at press time had raised more than $60,000 in donations on its GoFundMe page.

Feed Albany is just one largescale example of how organizations in every corner of the Capital Region are working to make sure everyone stays fed during the COVID-19 pandemic. There’s Isaan Thai Star, a Thai restaurant in Hudson that offered 100 free servings of Thai fried rice on a Tuesday afternoon in April. In the Spa City, Saratoga’s Broadway Deli for weeks offered free meals to anyone who needed them. There’s also Troy’s Berben & Wolff’s, which handed out free meals and produce through its “Take-In Troy” campaign. And Rivers Casino & Resort in Schenectady, which, like Feed Albany, has been pumping out meals for the community throughout the crisis.

“We have already partnered with many local organizations that we do food donations with or volunteer at,” says Rivers Casino’s Human Resources Manager Kate McMahon. “The additional piece was adding first responders and hospital workers to that mix. We wanted to holistically support the organizations that are supporting our community, our families and our neighbors.” The list of recipients of meals made by volunteers at Rivers (which has been forced to close due to the pandemic) now includes employees of Mohawk Ambulance, Ellis Hospital and St. Peter’s Hospital, as well as charities such as Joseph’s House & Shelter, Bethesda House of Schenectady and the SEAT Center. “You never know when one of your team members is going to be a recipient of one of these meals, or one of their neighbors are, or one of their family members,” McMahon says. “So it’s very important that we’re very active in the community.”

The caring souls behind Feed Albany even have a plan in place to keep the good-doing flowing long after the COVID-19 virus is eradicated. “We’ve applied for nonprofit status, and we’re putting together a board,” says Purnomo. “We hope that it’s something that can continue to fill the need as time goes by.” There will always be need. And, if this pandemic has shown us anything, it’s that as long as there’s need, there’ll be good people to meet it. —Natalie Moore

Soon after the COVID-19 pandemic hit New York State, Governor Andrew Cuomo made an
appeal to Empire State manufacturers deemed “essential,” to begin mass-producing much-needed medical supplies—something that many of them had never done before. These included everything from bottles of hand sanitizer and disposable hospital gowns to medical face masks and even ventilators (the latter being among the scarcest devices right now in the world). The idea was that these products could be used immediately by doctors, nurses and medical staffs at offices and hospitals across the state or country, many of which were dealing with dwindling supplies.

A number of Capital Region businesses stepped up to the plate. Below is a list of five, and the crucial products they’ve produced for the greater cause. 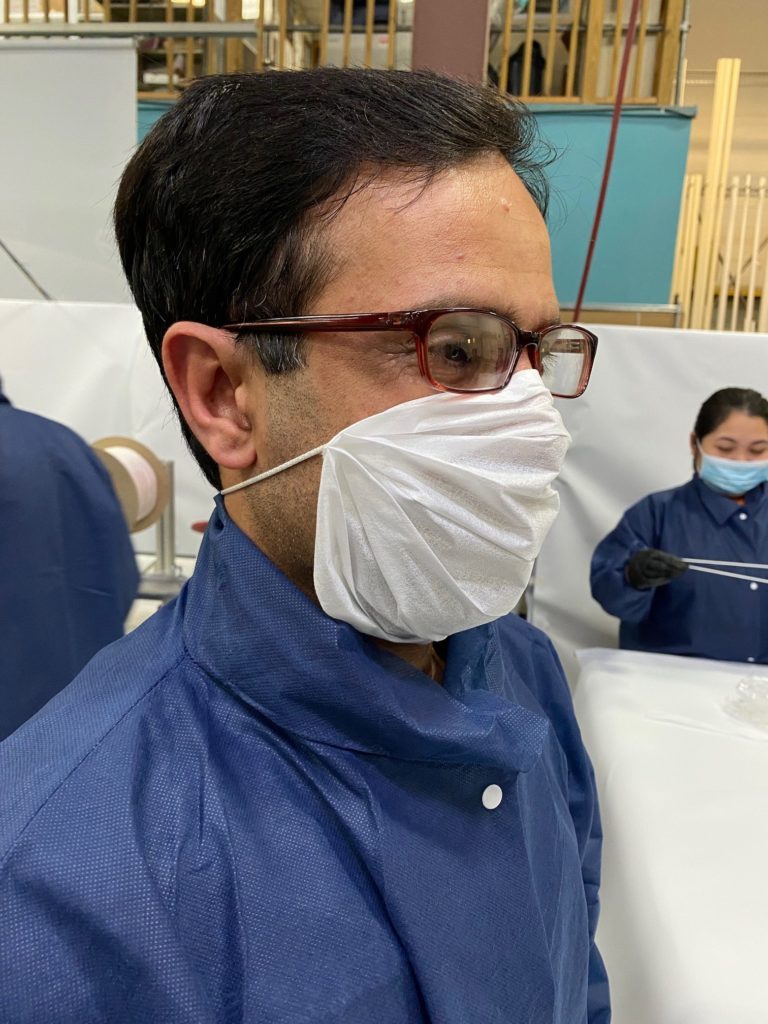 Comfortex Window Fashions
Normally, Comfortex produces honeycomb-style window shades, made out of nonwoven fabrics, ones that are good insulators and when cut, don’t fray. But just a handful of months later, the Watervliet-based company is rolling medical masks and disposable gowns off of its production line at a lightning pace. “Right now, we’re producing 5,000 masks per day,” says Thomas Marusak, Comfortex’s founder and president, “and we’re gearing up to do about the same amount of disposable gowns.” While the intent was to ship the gear to local hospitals, Marusak says that it all would’ve needed to be rated by the US Food and Drug Administration (FDA), which would’ve delayed production by months. So Comfortex once again pivoted, getting its supplies to places such as the Center for Disability Services, FedEx and local emergency medical services instead. 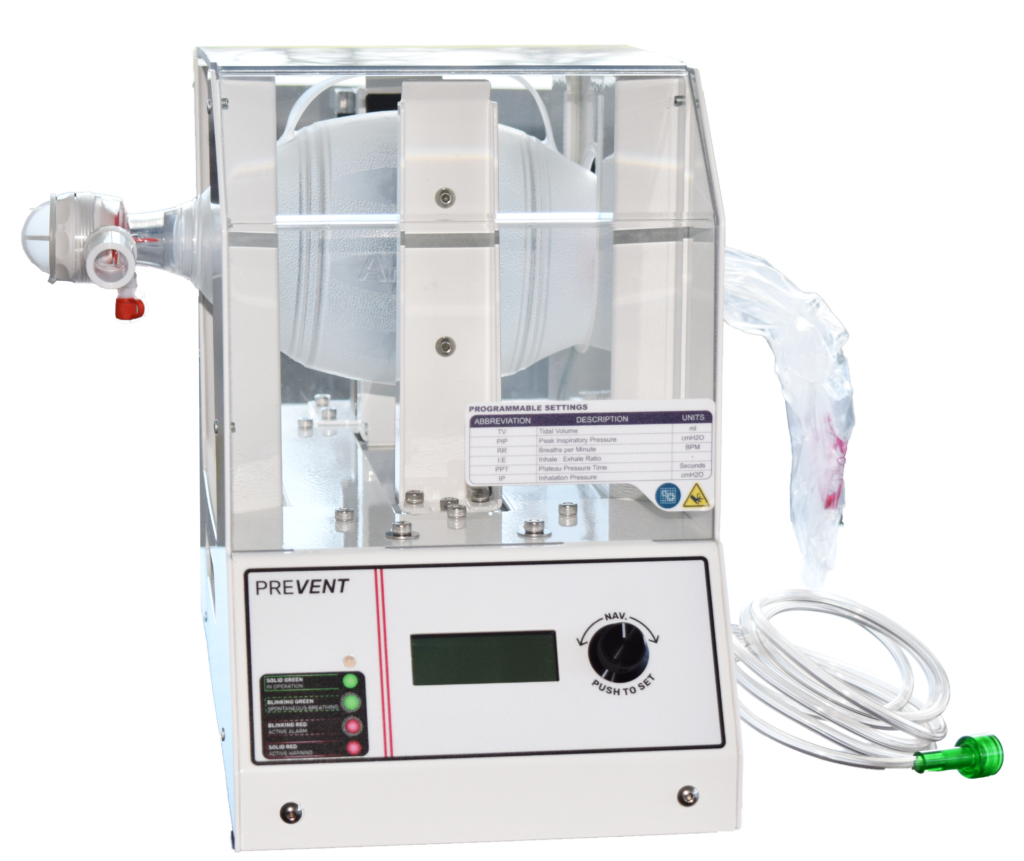 Precision Valve & Automation (PVA)
Cohoes-based Precision Valve & Automation (PVA) has been producing automated dispensing and coating systems for nearly three decades, and as Frank Hart, managing director of sales and marketing at the company, tells Capital Region Living, that’s put them right in the supply chain for ventilators. That sent the company headlong into the ventilator production business, and at press time, PVA had just become the first nonmedical manufacturer in the world to secure FDA approval for its groundbreaking design. PVA’s got its hands in sanitizer, test kit dispenser and face shield production, too. 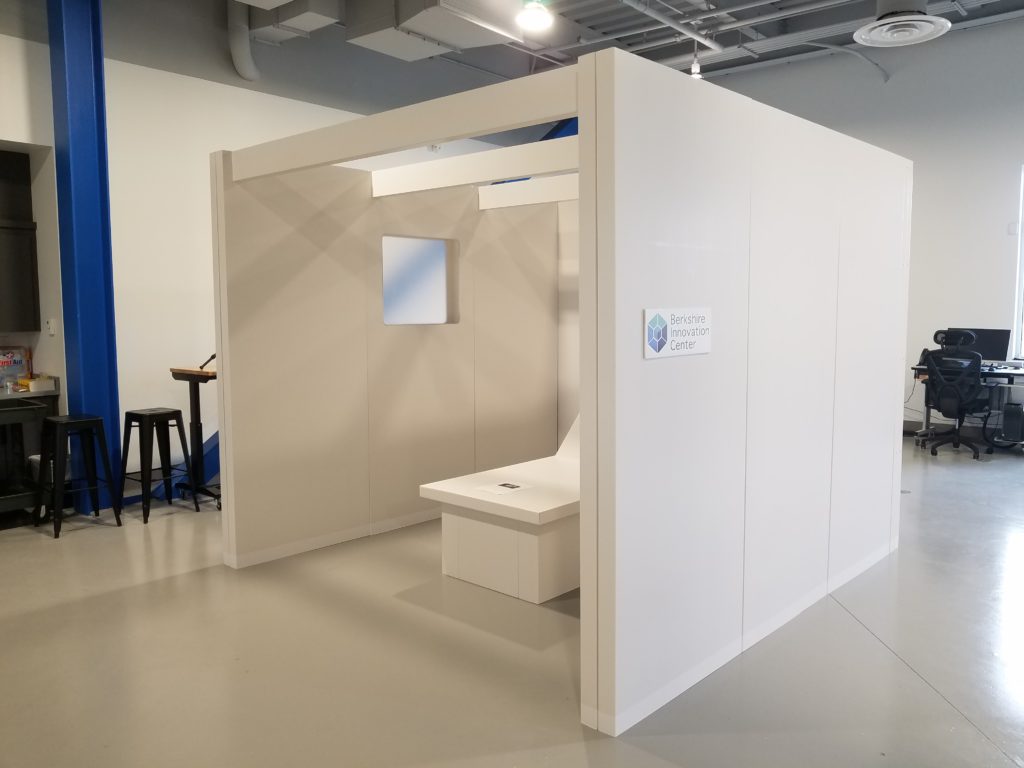 Mohawk Fine Papers Inc.
For nearly 90 years, Mohawk Fine Papers Inc. has been producing paper out of its Cohoes factory. And when the COVID-19 crisis hit, the company’s access to a wall-thick type of paper called Xanita Board, which it imports from South Africa, and innovation met face to face. What Mohawk ended up producing—without even having to use its own machinery—was a concept for temporary, private hospital rooms, with their walls and beds fashioned completely out of the paper. The rooms require zero tools to construct and can be assembled in 30 minutes. The boards are also thick enough to be used multiple times and even wiped down, disinfected and stored for later use. “This whole process has been pretty fast and furious,” says Thomas O’Connor III, Mohawk’s vice president of channel management. “From idea to design to manufacture, it was really [done] within a week. We are currently going to market with it.” 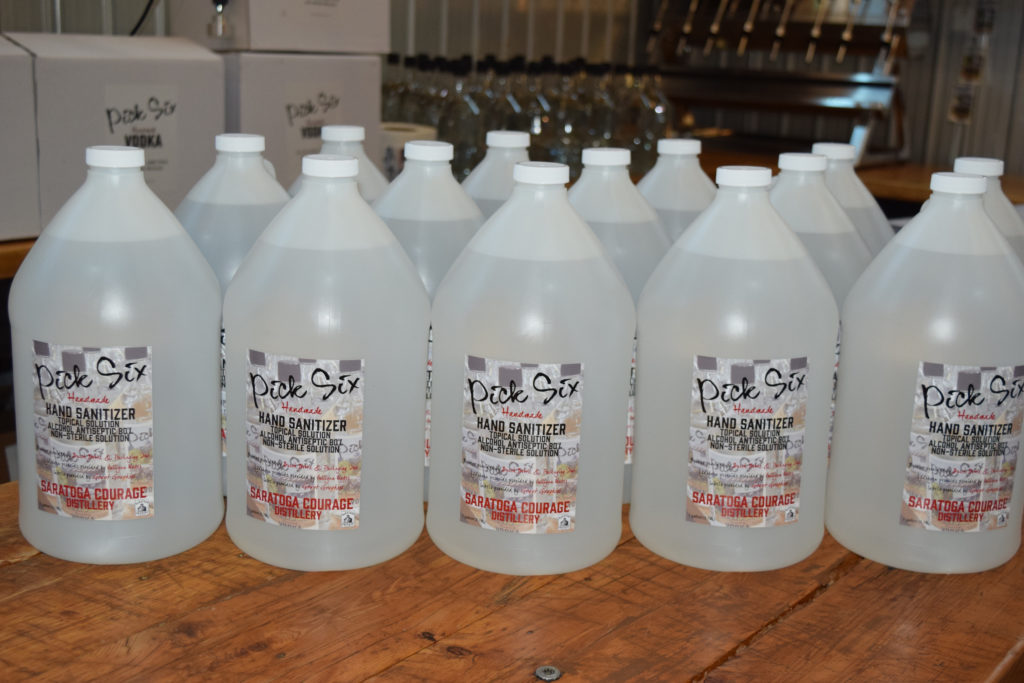 Saratoga Courage Distillery
Located in Greenfield Center just outside of Saratoga Springs, Saratoga Courage Distillery is best known for its Pick Six Vodka and moonshine. When the crisis hit, CEO Holly Shishik, who moonlights as a Rite Aid pharmacist, thought she could produce hand sanitizer. So, working off of the World Health Organization and FDA’s recipe, Shishik and her team got to work. The distillery ended up producing 130 one-gallon bottles of hand sanitizer, which it distributed to the Greenfield Fire Department; emergency squads in Corinth, Ballston Spa and Wilton; as well as the emergency room at Saratoga Hospital. 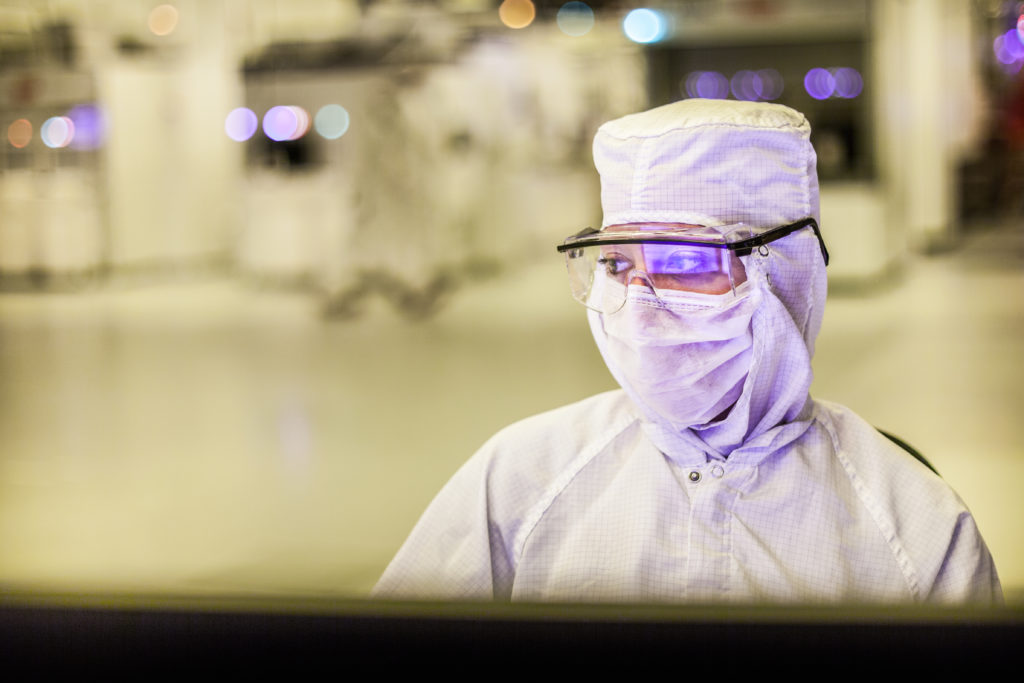 GlobalFoundries
GlobalFoundries, which has a location in Malta, produces semiconductors called “wafers,” which store thousands of microchips on them. While it was making them long before the company was deemed “essential,” the wafers have become an integral part in the frontline fight against COVID-19. One client, whom the company could not reveal, uses a wafer in a smartphone-based system that allows medical workers to do mobile ultrasounds on COVID-19 patients’ lungs. And the wafers have even found their way into cutting-edge research technology. Says Laurie Kelly, GlobalFoundries’ vice president of global communications, “Some of our chips are being used in IBM’s supercomputers, which are being used right now to do a lot of heavy analytics and understanding more about the COVID-19 virus.”
—Will Levith

Being an essential worker during the COVID-19 pandemic is stressful enough. Now imagine piling on trying to find childcare in a time when all schools and daycares are closed.
Thankfully, Capital Region essential workers have been getting a helping hand when it comes to childcare. Since the end of March, the Washington-Saratoga-Warren-Hamilton-Essex (WSWHE) BOCES, has been offering free childcare services to essential workers at its facilities in Hudson Falls, Glens Falls and Saratoga Springs.

“We’ve received such positive responses from the families of the children,” says Denise Capece, executive principal at WSWHE BOCES. “One parent expressed that their child was upset when he had to stay home one day for a family matter.” The free childcare program runs from 7:30am–3:30pm during the week and includes breakfast, lunch and a daily snack. Each facility has two classrooms: one for children ages 3 to 5, the other for children 6 to 12.

As for the obvious concern over potential COVID-19 contamination, Capece says that BOCES has taken extra precautions. Every morning, each child’s temperature is taken at a registration table, and those running a fever are sent home. Social distancing—only eight children and two adults are allowed per classroom—and handwashing are also strictly enforced throughout the day.

The number of children attending the program fluctuates depending on the day, but Capece says that BOCES has 25-30 kids enrolled who come fairly regularly, with a current capacity of up to 48. “Really, we can expand as much as we need,” she says. “We’re currently using our employees as childcare workers, and we have plenty of classrooms.”

Three local school districts—Saratoga Springs, Glens Falls and Fort Edward Union Free School—are providing the children’s meals, and WSWHE pays for the snacks and protective equipment, such as gloves and masks. As for how long BOCES is prepared to offer free childcare to essential workers, Capece says: “We’ll keep it open for the duration of the COVID pandemic.” —Jeff Dingler