Cover Companions 2018: The Adventures of Amber and Chloe the Wonder Dog

It was love at first sight for Amber, who had substantial experience with dogs. 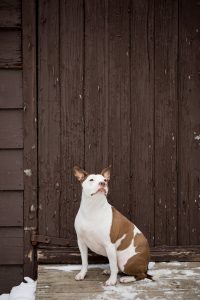 A photograph said it all to Amber Neidrauer. That Facebook message from a nephew led Amber and her family on an unexpected journey of twists and turns, heartaches and joys. And it opened a much needed new chapter in the life of Chloe the Wonder Dog.

Today’s tail-wagging wiggly dog always ready to give kisses and hugs was not always “Chloe” and in her past life the “wonder” nickname would have meant wondering if she would make it. Her life began in North Carolina. Her dad was chained in a backyard; mom was struggling to care for a litter of pups. The tenants who had lived there had moved away, leaving the furry family behind. When authorities arrived on the scene, Chloe’s dad had died of starvation and exposure and mom and the pups were in jeopardy. Chloe, a few weeks old, was the only pup to survive.

Life began to brighten for the little spunky pit bull terrier when she moved to a foster family, gaining strength from 24-hour care with regular bottle feeding. Once well enough, she received an early start on social skills from her foster family who took her just about everywhere, including ballgames.

From foster care, she was placed with the rescue service known informally as “The Fort” and its formal name of Fortitudine Vincimus. This Latin phrase could be a motto for Chloe—“by endurance we conquer.” Founded by Jake Gardner formerly of the popular Animal Planet reality show, “Pits and Parolees,” the Fort notes that while its focus “is primarily The American Pit Bull Terrier, a life is a life and we will never discriminate against a dog based on breed.”

That’s where their nephew noticed Chloe’s photo. Fortunately for Chloe, he knew who should learn about this pup. It was love at first sight for Amber, who had substantial experience with dogs. Her dad raised beagles and she had pets of her own. A flurry of calls and paperwork followed between Amber and The Fort. With approval for adoption, Amber and family headed down South to meet this little one. They were happy to meet each other. “She snuggled with us,” Amber recalls.

A few days after, joy turned to worry when Chloe became lethargic and couldn’t keep down her food. They had not yet returned home and sought medical care immediately. A veterinarian gave the feared diagnosis of Parvovirus, which affects the gastrointestinal tract and can lead to severe dehydration and deadly consequences. Young unvaccinated puppies are especially at risk for “parvo.” That plus Chloe’s rough environment before being rescued immediately came to mind. Although Chloe had received a booster, Amber suspects that it was not in time. Once again, Chloe persevered back to good health. Amber has become a staunch advocate for vaccinating dogs and keeping them up to date on those inoculations. She’s also an advocate for spaying and neutering pets. 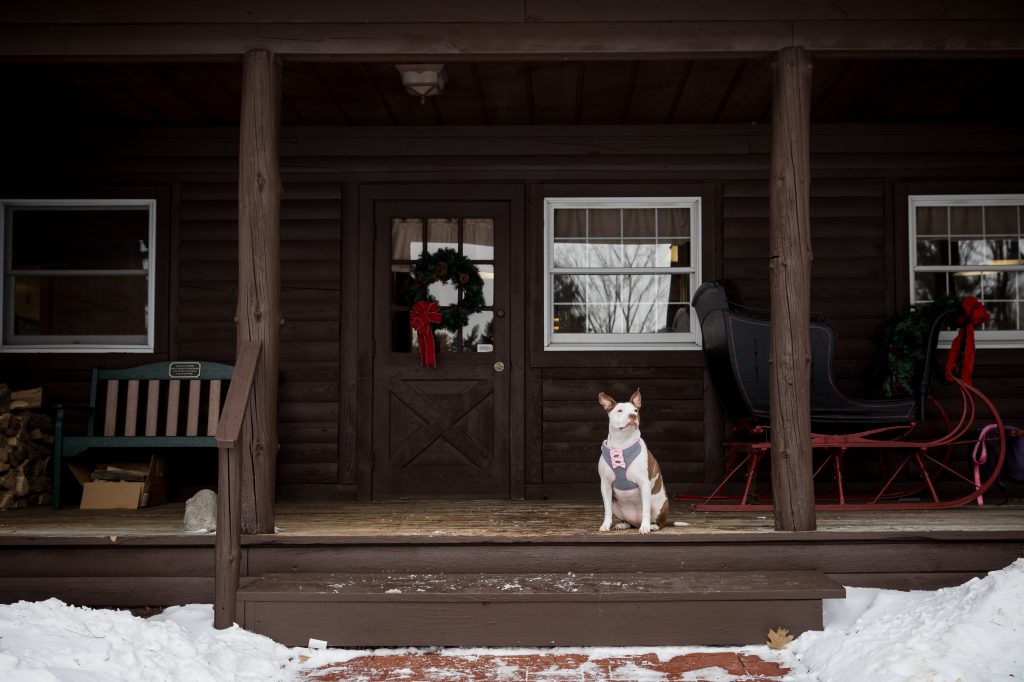 Finally, they all arrived home in the Capital Region. Chloe settled in to her new home, which also includes a Chihuahua, and bonded with Amber’s two young sons. “They love each other,” Amber observes, but adds that, clearly, she and Chloe have a very special connection. “If I am feeling anxious, Chloe is right there as a calming soul.” Amber explains Chloe will push her way between her human family members to get to Amber’s side where she stays like a sentry. “She is unabashedly loyal – and the most loving dog.”
Chloe, who has her own Facebook page chronicling her progress and adventures, enjoys playing with a water bottle or just being goofy. She especially likes to accompany her family on errands and outings. On a recent visit to a pet supply store, Chloe was on the lookout for a customer interested in stopping to say hello and was ready with love, wiggles and snuggles when people asked if they could pet her. Amber notes that Chloe is a great ambassador for her breed, for dogs in general, and she helps everyone keep in mind the joy in life.