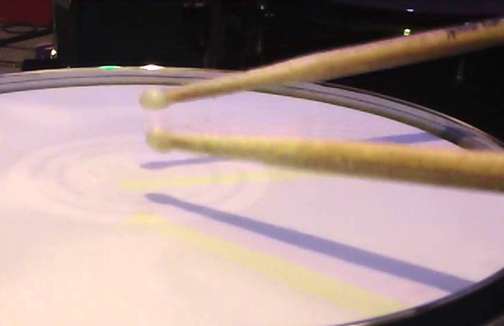 Troy native Brian Prout, long-time drummer for the chart-topping and award-winning country music group Diamond Rio, grew up in Brunswick and worked in the family store (the Pic Up) on 102nd Street back in the 60s and 70s in the Lansingburgh section of Troy.
Dropping by the Roc Lounge (now the Plum Blossom Restaurant) one night in Troy, he met his older brother Del for a talk.  It was a serendipitous meeting but the advice given to Brian by Del was solid and life changing. “If you want to see Martians, you have to go to Mars.” It was all that this country star to be needed to hear.  His dad, a local butcher and store owner, held on to a dream of a grand grocery store named Prout & Son but this was just not Brian’s dream. He left our area, dreaming and working hard toward his goal of being a professional drummer.

The Prouts were a close-knit family, made up of mom, dad, an older brother no longer at home, and two sisters.  Brian admits that his mom, Leah Prout, gave him the “roots to grow and the wings to fly.” Sister Flora, now the bookkeeper for this magazine, provided Brian with his first set of drums as a gift that we know now started his musical journey.
Brunswick was country back then to a much larger extent than it is now. Brian’s high school years were spent at Troy High School where he was a member of the school band/concert group of young musicians, as well as The Speigleaires Junior Drum & Bugle Corps and the Troy Boys’ Club Skyliners (as mascot).  At Troy High, Prout received the first of many awards for his music and one that still touches him deeply.  On the final concert day of his high school years, band director Eugene Kane presented Brian with the Roger Fulkerson Memorial Award (the first ever). Brian still speaks of this award, in memory of a fallen Troy High School graduate in Vietnam, with the same gratitude and awe as the Country Music Group of the Year Awards and the Grammy that followed as a professional.

In leaving our area, Brian traveled to Arkansas where he pumped gas and then moved on to southern Florida to play in clubs and seek a living closer to his dreams. When he came back to Troy to attend his dad’s funeral he was replaced in the band he was a member of, The Hot Walker Band. He then made the move to Nashville and joined the Heartbreak Mountain band. Like so many serendipitous happenings in Brian’s young life, he ended up meeting, through a friend, a young group of men called The Tennessee River Boys who were coming on strong and performing at the now defunct Opryland Theme Park. Also at that time, that band was losing its drummer to a “more settled life.” Brian was eager to join the group and not settle down. The rest is musical history as that band became what is now Diamond Rio. Ramon Noodles and starving artist diets were about to be a thing of his past. He found his “Martians” and they were all in Nashville, Tennessee.

Brian laughed as he mentioned to me that, at Troy High, his favorite subject matter outside of music was Geography. “I loved learning about all geography and imagining seeing in person what I was learning,” he recalled. With the coming trajectory of Diamond Rio there are very few of those places he would not see. He observed, “Someone will mention that they are from a small town somewhere and I say, ‘I have been there!’ One thing about doing 150-200 shows a year, you see so much.  We have performed in many countries in the world, as well as the cities and towns through the U.S.”

Certainly, the road that few travel to fame was filled with many exciting moments, including wives, children and one very famous and well publicized relationship.  After Sonny Bono, the singer and congressman from California, died from a tragic skiing accident, Brian met and dated for some time Sonny’s widow, Mary.  Mary Bono went on to win Sonny’s congressional seat.  Brian and Mary were recipients of much celebrity attention and paparazzi. Brian speaks fondly of their time together, noting how this young man from Brunswick met and dined with the political elite, including Presidents Ford and Clinton and both Presidents Bush. I had the feeling that Brain took the wings his mom granted him and flew to the most exciting places that the country he loves so much had to offer.

One funny story involved a tall tanned gentleman who became Prout’s smoking partner at these political events. Brian would be hobnobbing with Mary and the other attendees when a tap on the shoulder would ultimately come and a deep voice would ask if he was ready to have a cigarette. The two would wander outside and enjoy each other’s company and their bad habit of sneaking the “smoke.” This gentleman turned out to be the current Speaker of the House, John Boehner.

On another evening, Congresswoman Bono and Brian were given permission to stroll the grounds of the Vietnam War Memorial after hours. Brian looked for and found the etching for Roger Fulkerson, the Troy native and namesake of the memorial award that he had received so many years ago. Troy and his youth are never far away from Brian in both his heart and mind.

With six Group of the Year awards from The Academy of Country Music, as well as the Country Music Awards, 12 million records sold, 15 Grammy nominations, 1 Grammy Award and 1 Dove Award, Diamond Rio is still touring and adoring fans.  The business has changed from one of relationship building and Brian admits that there really isn’t much that appeals to him in Country Music of late.  Diamond Rio always tries to have uplifting music and now, it seems that drinking themes and less wholesome lyrics are the norm but, Brian quickly added, this will change as all music does every few years. “In God We Still Trust” is an example of what Diamond Rio loves and plays to the delight of their fans.

Very blessed and honored to have grown up in the Capital Region of New York, Brian is still living happily in Nashville, Tennessee, continuing to realize his dream of drumming for a living and skiing for enjoyment out west when not performing.  While he is certainly one talent that got away from us in the area, he still loves and dreams of Ted’s Fish Fry coffee shakes and Duncan’s Dairy Bar’s raspberry pie.  John, the owner of Duncan’s Dairy Bar, remembers Brian’s drumming as a youth and his cousin Leonard’s cows running in from all parts of the field to hear the local boy’s practices. Honestly, I must admit, I too remember the cute blond boy at the Pic Up down the street who would come with his sister Lori to work, but ended up playing endlessly with us, the city kids.