When Austin Nelson and Chris Woodyard found a run down, 7,000-square-foot log cabin on Zillow, all they saw was opportunity. 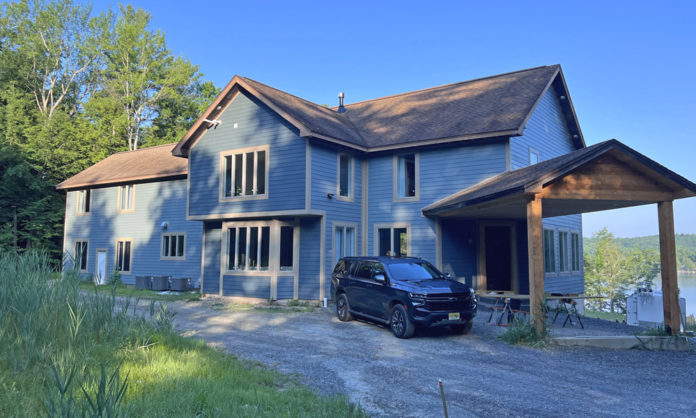 Never underestimate the power of a mindless Internet search to change your life—or your location. Interior design enthusiast Austin Nelson learned that recently. The recruiting operations executive lives with his partner, Chris Woodyard, in Hoboken, NJ, but has lately been spending more and more time here in the Capital Region. Early last year, bored and stuck in pandemic lockdown mode, the couple were itching to shake things up. “At the time, Chris worked for a mortgage company, and he loves real estate,” says Nelson. “When we sit around the TV at night, he’s on Zillow mapping out stuff.”

Through this seemingly harmless late-night real estate browsing, Woodyard spotted a real gem: a gorgeous four-bedroom and four-bath home, almost 7,000 square feet, with a once-in-a-lifetime view of Burden Lake in Averill Park (about a three-hour drive from Hoboken, which sits on the Hudson River right across from Manhattan). “Chris found it, and he was like, ‘I see it—I want it,’” laughs Nelson. 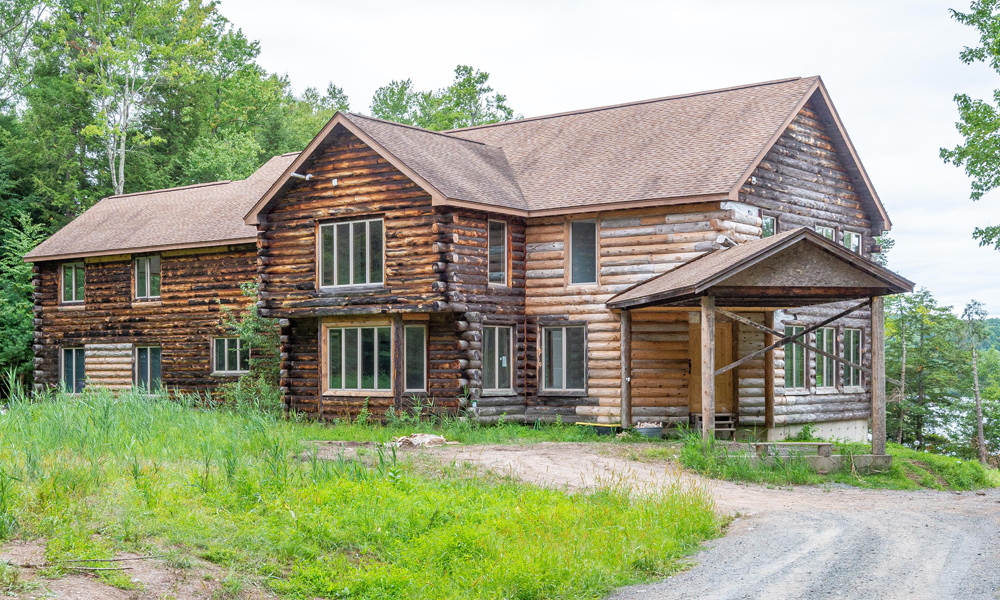 So Woodyard and Nelson traveled up to the Capital Region to see the lakefront property for themselves. But the home was not in good shape, having been unoccupied and under sporadic construction for nearly two decades. “Teenagers used to have parties there when it was just a shell of a house,” says Nelson. Before then, the land had belonged to an old YMCA camp. Some neighboring lots even still have old bathhouses and other camp structures with names of old campers etched on the walls. “We didn’t realize what a big undertaking it would be because we’d never really renovated a home before.”

In fact, Woodyard and Nelson had never even owned a house before. In spite of this, and the major TLC that would be required, the couple bought the lakefront fixer-upper in March 2021 with the intention of doing a full-home renovation and redesign. “I was originally attracted to the log cabin feel of the house and the lakeside location,” Woodyard says. “Being around water was important; it’s very calming for me to sit and stare off into the water.”

In order to turn the barebones “shell” into the cozy, getaway lake house of their dreams, Nelson and Woodyard worked with local developer Rich Kelly of FieldCrest Development, who led the charge on remodeling the huge four-bed-and-bath structure. Even without any experience, Woodyard, who’s quite the handyman according to Nelson and apparently somewhat of an amateur architect as well, used software on his iPad to build most of the floor plans that he would then hand off to Rich, who made those plans a reality by bringing in everything from small details like fixtures and appliances to the big stuff, such as tiling and replacement log siding. 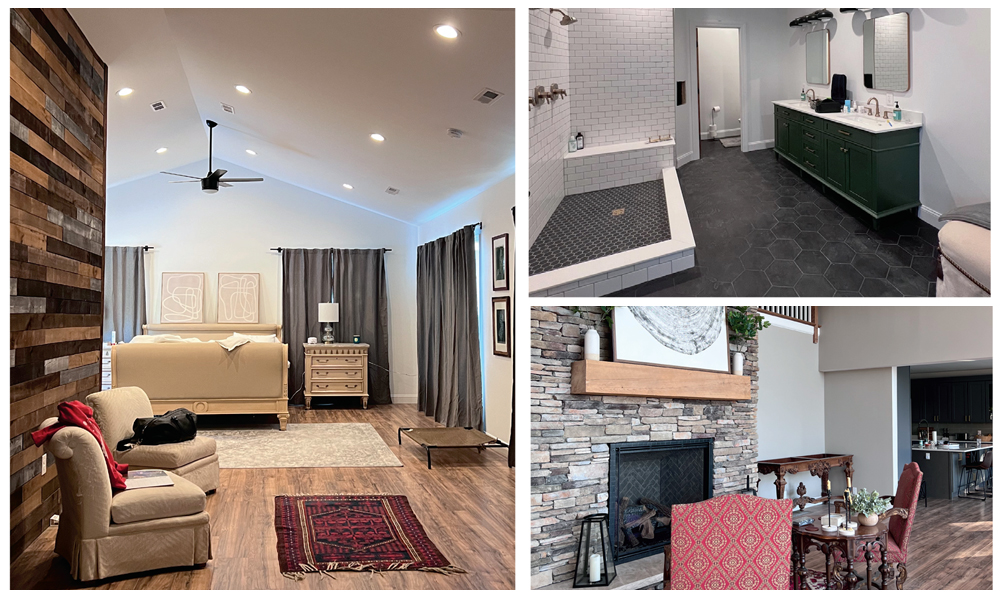 As for Nelson, he dove into his passion for decorating in order to transform the Burden Lake piece of real estate, leaning on one of his favorite designers, Fixer Upper host Joanna Gaines. “I definitely was able to use some of her design aesthetic,” he says. “We tried to do it somewhat on a budget but also with the help of family.” For example, Woodyard’s aunt and uncle were downsizing their home and getting rid of a pool table, so Nelson decided to design an entire classic pool room based on this beautiful family piece.

In addition to the physical challenges demanded of such an extensive renovation, as the project dragged on, it also tested the new homeowners’ connection with each other. “We almost thought we were going to get a divorce,” jokes Nelson, who’d been dating Woodyard for more than six years. “The redesign allowed us to use different creative parts in ourselves, but it also challenged our relationship.” A big part of that strain was the stress created by Covid’s effect on the supply chain, postponing getting basic materials that continually delayed the project. Thankfully, shortages didn’t permanently halt the renovations: Last Christmas, Nelson and Woodyard hosted both of their families for the holidays for the first time ever.

The romantic strain proved only temporary as well—Woodyard proposed to Nelson this past Valentine’s Day at Rockefeller Plaza. “I had originally considered proposing to Austin at the lake house,” says Woodyard, who eventually opted for a more public location. “We would frequently make trips to the house during construction and it felt incredible seeing walls, tiling, trim, and general spaces like the kitchen coming together. We’re nearing the finish line and finally stepping back we can see how much work we really put into the property. It’s been a labor of love.”

Labor of love is right. A year-and-a-half after closing on the house, its makeover is complete with a new modern-meets-vintage minimalist style showing off lots of natural textures and tones, such as stone, wood and leather, with shiplap walls, sliding barn doors, slate laminate floors, and natural wood beams on the ceilings (not to mention a brand new wooden deck). The master bathroom features a walk-in shower covered in immaculate white subway tile with an indulgent three showerheads. But most impressive is the grand room with its great stone fireplace, cozy rockers, armchairs and colorful Moroccan rugs, plus wall-to-ceiling windows displaying stunning views of Burden Lake below. And the men, along with their dog, Goose, are making most of the lake itself as well—donning ice-skates last winter and standup paddleboarding and boating all summer. 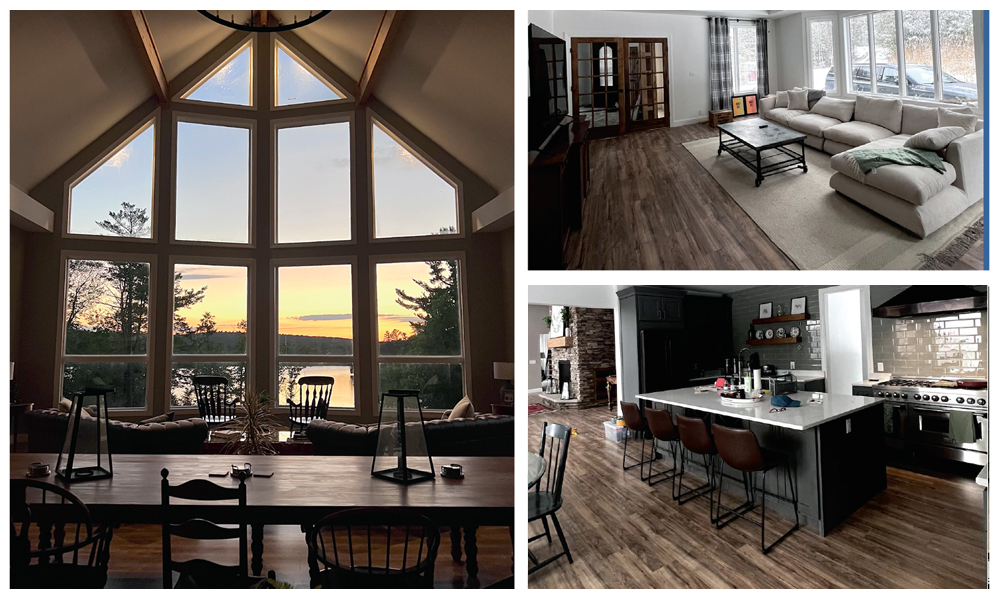 “It’s beautiful and very surreal looking out because you see the lake and trees and even a bald eagle that lives on the lake,” says Nelson about the view from the grand room. “When we host, I’ll turn off all the lights in the house so you can see the stars and the fireflies. It’s almost like our own terrarium.”

Now that the renovations are finished at last, the Garden State couple has not only been enjoying their New York getaway, but they’ve also begun renting it. “Austin created the Airbnb listing for the house shortly after we purchased it,” says Woodyard. “And we started to see requests come in, even with the house still under construction.”

Now nearly every weekend the Burden Lake house is booked up, and the engaged couple are even getting requests for weddings and other events. “But that’s TBD,” Nelson quickly adds. “We really love the area. We’ve been used to city life, but it’s been cool seeing that Albany is very much a city in and of itself.”

For now, Nelson and Woodyard are trying to enjoy the home more themselves, spending time up here whenever they can. Plus, they too have a wedding to plan soon. Who knows? They might already have the perfect location for a rehearsal dinner or a day-after send-off breakfast.

Facebook
Twitter
Pinterest
Email
Print
Previous articleHow to Ace a College Application
Next articleThe Capital Region’s Got Talent: 5 Local Stars Who Made it to the Prime Time Big Leagues