Latest Articles
You are at:Home»Issues»April 2020»Not Your Garden Variety Destinations

Olana and Yaddo are spring day trips that are all about the nature.

If you believe nature is a form of artistry, it shouldn’t surprise you that two of the most beautiful places to enjoy Mother Nature’s handiwork in and around the Capital Region are closely tied to the world of art. Just outside of Hudson is the Olana State Historic Site, the home and creation of renowned landscape artist Frederic Church. An hour and change north, in Saratoga Springs, lies the Yaddo estate, an artists’ retreat with ten acres of gardens open to the public. Both are National Historic Landmarks dating back to the 1800s, and neither have lost their allure or ability to make visitors feel at peace and at one with nature. Let’s explore them together. 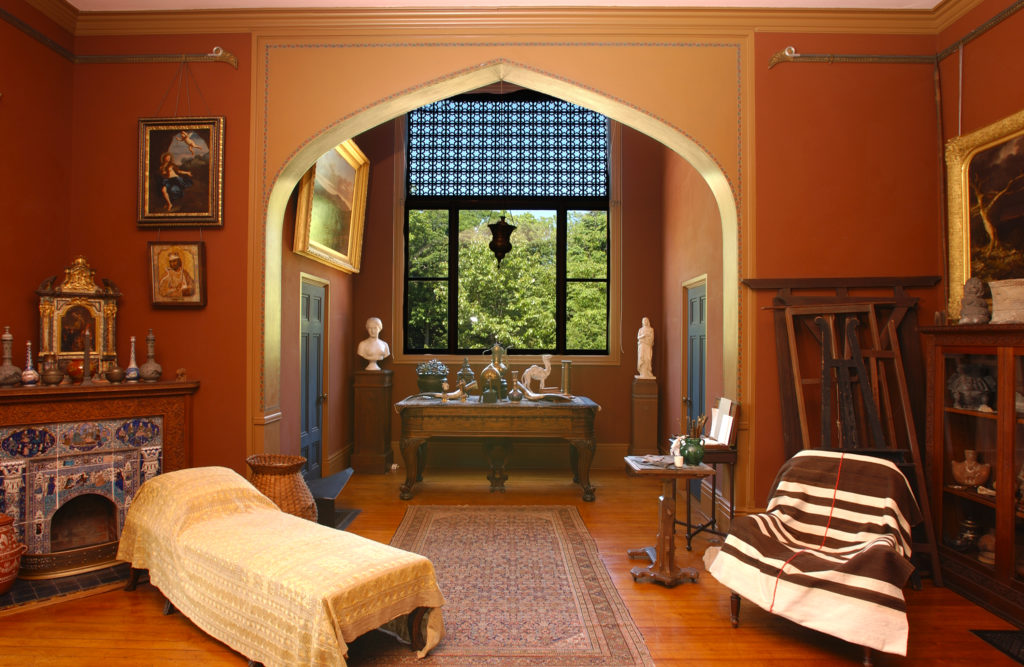 Olana State Historic Site
Frederic Church, a central figure in the Hudson River School of American landscape painters, created Olana over the course of 40 years, turning 250 acres of farmland and swampland into one of his greatest masterpieces. He and his wife, Isabel, raised four children on what they called “The Farm.”
“He reshaped this environment into his vision of Eden,” says Sean Sawyer, the Washburn and Susan Oberwager president of the Olana Partnership, the nonprofit organization that manages and preserves the estate in a public-private partnership with New York State. “He said he was ‘living at the center of the world 30 miles south of Albany.’”
Visiting Olana is, quite deliberately, like entering into one of Church’s paintings. As you walk the five miles of carriage roads, which Church laid out as his last piece of work at Olana, Sawyer encourages you to keep in mind that they were designed by an artist and to “walk with his eyes,” thinking about the trees he planted, the rocks he blasted and the retaining walls he built along the 10-acre lake he dug by hand. “He used the carriage roads to create [a path shaped]almost like a central nervous system to get you from point A to points B, C and D,” Sawyer says. “And all of those points are very carefully sculpted views that he planned up.”
Church was known for creating panoramic views on canvas, and he did the same with Olana. From the top of the hill, for example, you can see as far as the Berkshires to the Green Mountains to the Catskills and down the Hudson River to the Hudson Highlands, taking in parts of three states. Another spot, in front of the Main House, looks down the Hudson river to the Hudson islands and allows you to see east and west at the same time—making it a perfect vantage point from which to take in either the sunrise or sunset.
Just as inspiring are the more intimate views Church created. One of Sawyer’s favorite strolls is up the road from the old farmhouse the Churches first called home. You walk through trees, weaving your way along a carefully plotted path until you come across a switchback that slopes gently upward to the top of the hill and the Main House.
“It’s like playing pin-the-tail-on-the-donkey,” he says. “You are spinning around in the forest and all of a sudden your blindfold is removed, and you see the Main House, and it is really this wonderfully dramatic reveal.” This is something else for which Church was known. He was fond of pulling back the curtain to reveal his latest masterpiece to a stunned audience. “It was like performance art,” Sawyer says, “and that is what you get here, in 3-D, in your landscape walks.”
The Churches built the Main House in 1872 after 18 months spent tracing the roots of Christianity in the Middle East. It’s a unique mixture of Victorian architectural elements and Middle Eastern decorative motifs, with some Mexican and Jewish symbolism thrown in. The name Olana, which first appeared written “Olâna,” as the heading of a letter written by Isabel, is said to be “the old Latin name for a place in Persia.”
Before you get to the Main House, you pass through an English-style border garden maintained to bloom through the long season. “It is embedded in the entrance approach to the Main House, so you are intended by the Churches to see it as an object there, but it is hidden by a wonderful retaining wall that gives it that long season,” Sawyer says. “From the house, it preserves the view of all this natural wilderness. But when you are down there along the walk, you are able to go through these beautiful flower gardens.”
One of the most remarkable things about the flower garden is the hummingbirds. Olana is home to more than 140 species of birds, and it’s been called a birdwatcher’s paradise—although Sawyer says that the highlight is most definitely the plethora
of hummingbirds.
Speaking of hummingbirds, they’ll feature heavily in a major exhibition that is scheduled to run from May 9 through November 1 at both Olana and the Thomas Cole National Historic Site, which is located across the river in Catskill. As a young man, Church studied under Cole, who founded the Hudson River School of painting. The exhibition, entitled The Cross Pollination: Heade, Cole, Church, and Our Contemporary Moment, celebrates the two artists, along with Church’s friend Martin Johnson Heade, who was known for painting hummingbirds in their natural environment. Those paintings, called “The Gems of Brazil,” will be on display at both Olana and the Thomas Cole house. Visitors can cross the mile-long Hudson River Skywalk to get from one site to the other.
Sawyer says that viewing the main exhibit requires a ticket, although visitors can wander the grounds of Olana and see works by contemporary artists for free.
As a New York State park, Olana is open to the public 365 days a year from dawn to dusk. (At press time, state parks were still open, but Olana’s public tours and programs were suspended due to COVID-19.) You can also download a free digital tour to take on your own (don’t worry; the park has Wi-fi). The grounds aren’t only for art lovers; visitors are welcome to use the grounds to run, hike, cross-country ski, walk their dogs or otherwise enjoy themselves. Yoga classes are available from the spring through the fall, and “Mommy and Me” yoga and fitness hikes have just been introduced.
Sawyer’s one piece of advice to visitors: If you want to visit the popular Main House, book your tour in advance to avoid disappointment. One recent Sunday saw 150 people turned away from the Main House because of overcrowding. 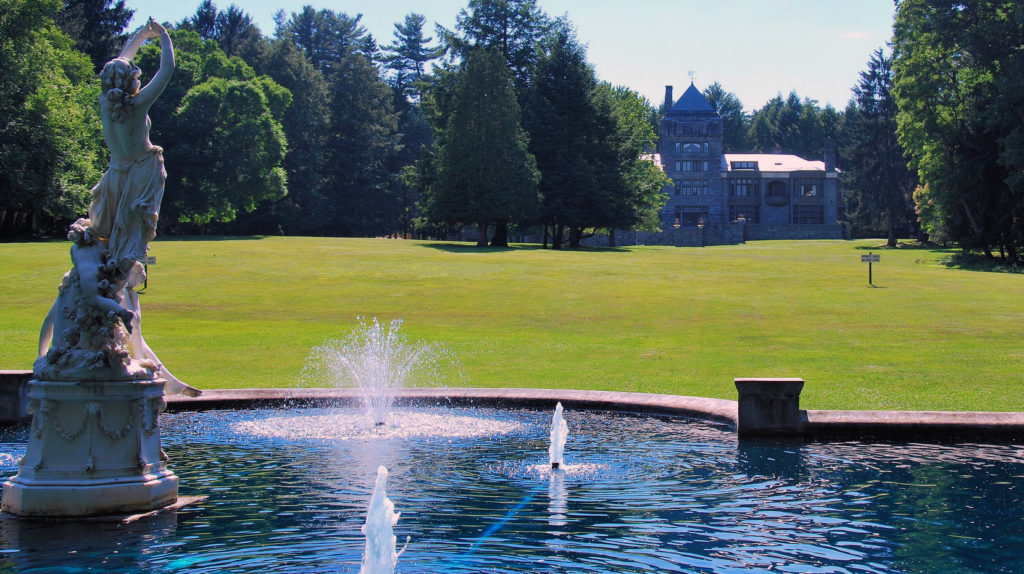 The Yaddo Gardens
Yaddo was the country estate of financier Spencer Trask and his wife, Katrina, a poet and playwright. The couple moved onto the property, formerly the site of a Revolutionary War-era tavern and gristmill, in 1881. When their home burned down a decade later, they rebuilt the Queen Anne Revival Mansion that stands on the grounds today.
The Corporation of Yaddo was founded in 1900 when the Trasks, who had no heirs—their four children had all tragically passed away—bequeathed their fortune to the establishment of a residency program for artists. They wanted Yaddo to be a place of “rest and refreshment [for]authors, painters, sculptors, musicians and other artists both men and women, few in number but chosen for their creative gifts.” The first group of guests arrived in 1926. Today, Yaddo each year hosts more than 200 artists from all over the world. (It is currently temporary closed due to the COVID-19 crisis.) Notable residents have included James Baldwin, Leonard Bernstein, Truman Capote, Aaron Copland, Sylvia Plath and Saul Bellow.
Although the Yaddo Mansion and a wide expanse of grounds are private and limited to its artist guests, the estate’s ten acres of gardens are free and open to the public year-round, just as the Trasks wanted. Spencer gave the gardens to Katrina as a gift in 1899.
There are two distinct gardens, both unique in style and influence—and designed completely by the Trasks. The couple based the Rose Garden on classical gardens they had seen on their trips to Europe. It has a central fountain and is overlooked by terraces, a balcony and a rose-covered pergola the length of a football field. On the balcony is a sundial on which is carved one of Katrina Trask’s better-known poems:
Time is
Too slow for those who wait
Too swift for those who fear
Too long for those who grieve
Too short for those who rejoice
But for those who Love
Time is Eternity
Visitors enter the Rose Garden through an iron grill gate bearing the Trasks’ initials. Once inside, they see four asymmetrical beds of roses in a variety of colors. Along the garden’s eastern edge are Italian marble statues representing the four seasons.
In a nearby clearing is another statue, sculpted in 1900 by William Ordway Partridge as a “memorial to the children of the house.” It portrays a youth in medieval attire, raising his arm toward the sky. The youth’s name, Christalan, combines the names of two of the Trask children, Christina and Alan, and was used for the hero of an epic poem Katrina had written. All four of the Trask children’s names are carved in the base of the statue, which is surrounded with white myrtle to symbolize innocence.
“Spencer and Katrina Trask were great experimentalists, and though they integrated formal influences, the Rose Garden design is exceptionally original,” says Catherine Kelley, vice president of branding and strategic initiatives for the Corporation of Yaddo. “Katrina said the garden was not to be distinctly Italian nor French nor English. It was to be Yaddo.”
The adjoining Rock Garden features a fountain and a woodland of trees surrounded by blooming perennials and shade flowers. The overall landscape reflects the Japanese influences that were fashionable at the turn of the 20th century, although some statues represent figures from Greek mythology. The dolomite rocks came from Spencer Trask’s own quarry. There are two terraces within the Rock Garden—each with a pool and spray fountain—connected by a stream. Paths meander through both of the gardens and the surrounding woodland. “Together, the Rose Garden and Rock Garden combine the formal and the free, the poetic and the idyllic, human art and nature,” Kelley says. “Katrina wanted her garden to be a garden of delight, a garden of romance—perhaps an expression of her own life and ideals.”
The gardens are maintained by the Yaddo Garden Association, an organization made up entirely of volunteers. The group was formed in 1991, to save the gardens from the effects of 100 years of Upstate New York weather, as well as incidents of vandalism and theft. Its efforts have been highly successful. Today, the Yaddo Gardens are among the most popular attractions in Saratoga and receive more than 60,000 visitors annually. They’re open every day from dawn to dusk, except on Saratoga Race Course’s Travers Day in late August, as Yaddo is adjacent to the racetrack. Anyone is welcome to stroll the gardens on his or her own, at no charge, but those who want to join a tour—including ghost tours on fall evenings—must pay $10.
Kelley describes the gardens as a “peaceful, beautiful place all year round.” She explains that winter brings “the quiet of a snow-filled landscape,” and the four marble statues representing the seasons are housed in transparent coverings so they can still be seen. Not surprisingly, however, most visitors come between April and October, with the peak blooming season of course being the summer months. The roses begin to bloom in mid-June and reach their peak between about the third week of June and the end of July, and then again in mid-to-late August. The Rock Garden is in bloom from mid-June through mid-September.