After reopening in Troy in July, Tatu celebrated its new location ribbon cutting earlier this month.

When my boyfriend, Connor, and I arrived at the new Tatu Tacos & Tequila, the Saratoga restaurant that closed in December and reopened in Troy in July (an official ribbon cutting for the new space was held September 8), we were greeted by Jennyfur Spaulding, who co-owns the restaurant with Chef Kareem Nejame. With a warm smile and outstretched hand, she led us through the low-lit maze of murmurs to our high-top table and tall, black, leather bar stools. A black paisley pattern runs from floor to ceiling in the restaurant, and eccentric art from local tattoo artists and pieces the owners picked up along their travels cover the walls.

Tatu boasts a creative menu inspired by Mexico’s Yucatan Peninsula that highlights the Lebanese influence on the region’s food. Other culinary influences include the Middle East, Spain, North Africa and the Caribbean. If the cuisine isn’t enough to entice you (but how could it not be?!), Tatu also has one of the largest collections of Mezcal, Tequila and Sotol in the Capital Region; and even has a menu of tattoo designs that an artist will ink on you.

We were first served some delicious spiced popcorn, accompanied by a flight of 123 Organic Tequila. Tequila gets darker as it ages, and 123 Tequila boasts three different colored spirits—a Blanco (clear), Reposado (a light gold color) and Añejo (a deeper gold). The deeper the color, the smoother the tequila goes down, and the more fire you feel in your belly.

Next came the Papas Fritas (Spanish for potato chips). While I was expecting some seasoned fries and dip, we got the softest yet crunchiest, most delicious potatoes. They were sprinkled with bright, fresh chives, the cotija cheese perfectly crumbled in a smokey, creamy sauce with a hint of paprika. As we sliced through the potatoes like butter, steam poured from their soft, cooked center. They were gone almost as soon as they came.

Our main courses arrived just as we were admiring a painting of Anthony Bourdain, his knuckles tattooed with the words “CHEF LIFE”. My Chicken Pibbil—generously flavored, slow-cooked, pulled chicken—was neatly placed on a bed of seasoned cinnamon rice. Garnished with an avocado sauce, the salty, thick chunks of tomato and sweet onion provided a wonderful infusion of flavor. Connor’s Mayan Prawn Tacos were equally impressive. The pineapple habanero that coated the top of the taco was sweet and extremely spicy—enough to make your lips tingle—but not enough to scare you away from another bite. The charred shrimp on a bed of greens added a satisfying crunch and texture. 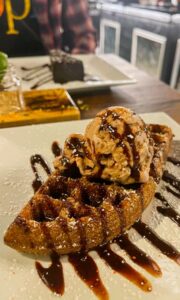 As we dined, we watched Jennyfur flit around from table to table. Attentive to every customer, she helped bring the front of the place together. Kareem could also be seen through the kitchen door windows, hard at work in the back. While the restaurant was busy earlier in the night, nothing felt rushed; I could’ve stayed their for hours.

But before we could say adiós, we just had to try the flourless chocolate cake, which was soft and creamy like a mousse with a light sprinkle of powdered sugar on top, as well as the churro waffles, which came topped with ice cream and sprinkled with—yes—a chili lime spice. In short: We’ll be back.